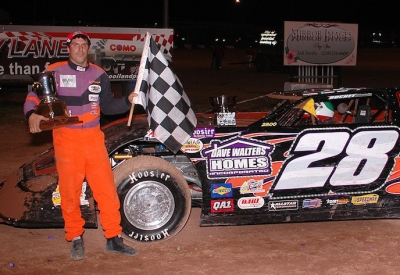 Hensel settled for second with Pat Doar of New Richmond, Wis., in third. Todd Gehl of Solon Springs, Wis., was fourth and Lance Matthees of Winona, Minn., rounded out the top five in the WISSOTA-sanctioned special.

At the race's outset, two-time race winner Steve Laursen of Cumberland, Wis., jumped into the lead from outside the front row and led by four lengths early while the eighth-starting Provinzino quickly moved into the top five.

Laursen stayed in control as he entered lapped traffic, but ran into problems when he spun in turn one, bringing out a yellow flag and handing the lead to Hensel.

Hensel led Doar, Provinzino and Gehl back to the green flag with 17 of 25 starters still on the track, and Provinzino moved into second before another caution appeared for Jeff Hinkemeyer, who slid over the fourth turn on lap 24.

Hensel fought off Provinzino on the next restart while Doar, Matthees and Gehl battled behind them. Provinzino continued working the low groove, finally slipping under Hensel with two laps remaining and racing to victory.