Guss wins at Boone as Aikey wraps up title 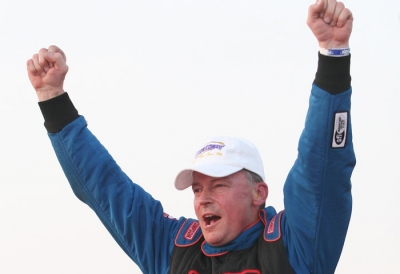 “This is great. This ranks right up there with anything else I’ve accomplished,” Guss said following his fifth $2,000 tour victory of the season. “I’ve raced here five or six times before but never at Super Nationals. It was really a fun race.”

Aikey wrapped up his career sixth series championship with his runner-up finish, moving up 15 spots after winning his consolation races. Jason Frankel and Charlie McKenna followed Aikey across the stripe. McKenna also came out of the consolations, advancing 16 positions over the course of the 50-lapper. Neal spun on the final turn, detouring into the infield before ending in fifth.

Neal drew the pole start and led Luke Goedert, Jason Hahne, and Dale Hackwell in the early going. Darrel DeFrance slipped into the top four on the 11th circuit. Neal and Goedert caught up with the back of the field on lap 18 and Goedert used traffic to his advantage in taking the front spot on lap 23.

Hahne was briefly in second, but Neal recovered and was inches ahead of Goedert when lap 31 was scored. The fourth running DeFrance was involved in a two-car tangle that followed and restarted in the back.

Once back at the front, Neal pulled away before another yellow on lap 38, then dealt with a pair of lapped cars with Guss and Aikey close behind until the final caution on lap 47.

Neal held on for one more lap, but Guss stayed high on the track and was just ahead the next time around.

“I had to run it as hard as I could against the top, Terry is a good racer. He gave me the high side,” Guss said. “I knew when I saw (Aikey) on the board that it was going to be tough.”

Aikey will take an insurmountable 905-839 advantage over Guss in the standings to the tour finale at West Burlington, the $10,000 to win Pepsi USA Nationals at 34 Raceway on Sept. 18-19.