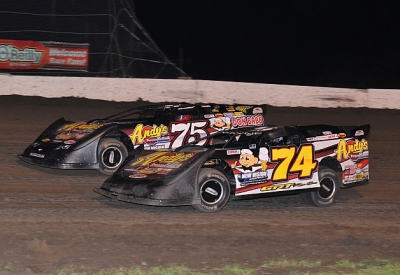 Phillips, debuting a black No. 75, settled for second after leading 15 of the first 20 laps while polesitter Al Purkey of Coffeyville, Kan., finished third. Brad Looney of Republic, Mo., and 10th-starting Eric Turner of Springfield rounded out the top five.

Phillips jumped into the early lead before Purkey moved past him amid lapped traffic on the eighth circuit. Phillips stayed with Purkey and went back ahead on the 13th lap, one lap before Scott Koskovich slowed to draw a caution.

On the restart, Payne took second from Purkey before another caution for a Greg Larsen-Bill Koons tangle, and when racing went back to green again, Payne went to work on Phillips. After a classic side-by-side battle, Payne took the lead on the 21st lap and led the rest of the way.

Notes: Payne's GRT Race Car has a Hatfield Racing Engine and sponsorship from Andy's Frozen Custard, Brian Burch Motorsports and New Vision Graphics. ... Payne's teammate Phillips debut a black GRT No. 75. ... Kyle Berck pulled double-duty and competed in the champ mod division after Brian Kosiski, the 15-year-old son of retired Late Model driver Steve Kosiski, was deemed too young to compete. ... After a break MLRA competitors wrap up September with a Sept. 26 event at I-80 Speedway in Greenwood, Neb. An originally scheduled Sept. 12 event at Nevada (Mo.) Raceway was pushed back to Oct. 17.