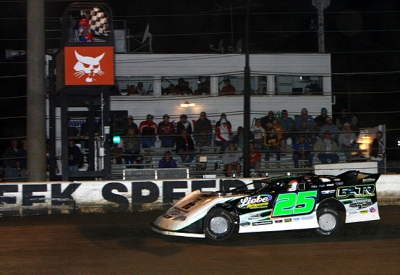 "The car was good," said the polesitting Simpson, who notched his WDRL-leading fourth victory of 2009. "We have a new shock package that we have been working on, and we are two for two with it — I think we'll keep it!" | Slideshow

Three Wisconsin drivers — Adam Hensel of Barron, Nick Anvelink of Navarino and outside front-row starter Chad Mahder of Eau Claire — chased Simpson to the checkered flag while fast qualifier Dave Eckrich of Oxford, Iowa, rounded out the top five at the 3/8-mile oval.

Simpson took command from the outset of the 40-lapper while Mahder and Hensel battled door-to-door for second for what seemed like 20 laps. Five cautions slowed the action throughout the race, but after the final yellow, Hensel took the second spot for good and tried to chase down Simpson.

Hensel got to Simpson's rear deck amid lapped traffic, but he couldn't gather enough steam to make a move on the leader.

The ninth-starting Anvelink made his late-race move up to third, taking spots from Eckrich, Deer Creek champion Keith Foss of Winona, Minn., and Mahder over the final 15 laps.

Notes: Simpson's MasterSbilt Race Car is sponsored by Liebe Trucking, GATR Volvo-GMC and Five Star Shop Service. ... Al Purkey of Coffeyville, Kan., runner-up in the series points, skipped the event to competed with the O'Reilly Midwest LateModel Racing Association in Topeka, Kan. ... Fast qualifier Dave Eckrich tangled with Chris Simpson in a heat race, but he rebounded for a third-place finish in the prelim. ... WDRL competitors take a lengthy break before wrapping up the season with a $5,000-to-win event on Oct. 10 at Cedar County Raceway, the first-ever series event at the track in Tipyon, Iowa.