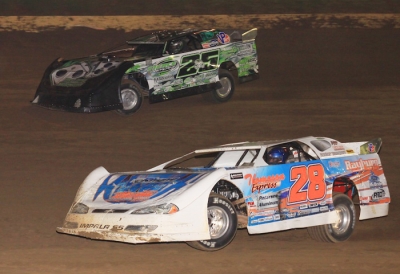 PEORIA, Ill. (Sept. 3) — Third-starting Dennis Erb Jr. of Carpentersville, Ill., won by a half-straightaway at Peoria Speedway for a UMP DIRTcar-sanctioned victory worth $5,000 at the quarter-mile oval. Erb was in a class of his own in picking up the checkered flag in front of sixth-starting Rodney Melvin of Benton, Ill. | Slideshow

Outside front-row starter Ryan Unzicker of El Paso, Ill., rallied from a first-lap flat tire to finish third after taking that spot from Billy Moyer of Batesville, Ark., in the closing laps. Wes Steidinger of Fairbury, Ill., rounded out the top five while over UMP points leader Jason Feger of Bloomington, Ill. — trying to outduel Erb for the $20,000 title — was sixth.

Notes: Erb's Rayburn Race Car has a Rhyne Competition Engine and sponsorship from Thomason Express, PRC, AFCO and Petersen Aluminum. ... The victory was the eighth overall this season for Erb, who wrapped up his third consecutive UMP Summernationals crown in July. ... Billy Drake of Bloomington, Ill., and Jeep Van Wormer of Pinconning, Mich., got together early in the main event with Drake being sent to the tail for his role in the collision. ... Donny Walden of Towanda, Ill., was running fifth early when he spun in turn four. ... Kevin Cole spun for two cautions. ... Jason Jaggers scratched from the feature lineup while hometown driver Todd Bennett tagged the field as an alternate. ... A Rich Bell-Richie Hedrick collision in the third heat ended with Hedrick being black-flagged. ... Jeep Van Wormer spun twice in the third heat, ending his run in that race. ... Walden led all the way in the fourth heat until Kevin Cole slipped past on the final lap. ... The next major event at Peoria is the $6,000-to-win Jon Hamilton Memorial for UMP Late Models on Sept. 26.