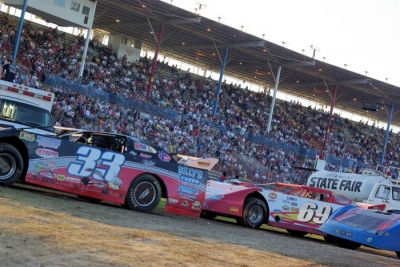 "I didn't know if we'd be a factor or not," said Anderson, who took the MLRA points lead with his second-place finish the previous night in Wheatland, Mo. "We were way too tight in the first 10 laps, and then the track kind of came back to us. It's always a great thing to beat (Billy) Moyer, though, especially after he snookered me with a couple of laps to go last night."

Polesitter Will Vaught of Crane, Mo., who rebounded from missing the previous MLRA feature in Wheatland, was second with 14th-starting Terry Phillips of Springfield, Mo., in third. Al Humphrey of Giltner, Neb., and Tony Jackson Jr. of Lebanon, Mo., rounded out the top five on a day when 44 Late Models entered action at the half-mile oval.

Vaught led the early laps with Joe Kosiski of Omaha, Billy Moyer of Batesville, Ark., and Humphrey in pursuit. Al Purkey of Coffeyville, Kan., moved up to third after a lap-14 caution for Evan Hubert, but a broken axle forced Purkey out, and Moyer gave up his second spot shortly thereafter with a flat right-rear tire.

The departures of Purkey and Moyer moved Anderson into second behind Vaught, and Anderson made his winning move on the backstretch with 12 laps remaining. Phillips moved up to challenge and set up a three-car showdown following a lap-26 caution with four laps remaining. Anderson held on to the lead while a battling Phillips and Vaught made contact on the final lap with Vaught holding on to second.