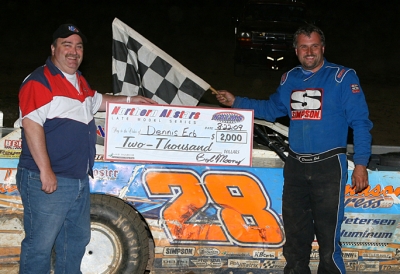 Fifth-starting Frank Heckenast Jr. of Orland Park, Ill., took the second spot from series points leader Kevin Weaver of Gibson City, Ill., on the 18th lap and held that spot the rest of the way at the quarter-mile oval. Weaver was third followed by Mike Mataragas of Dekalb, Ill., and Shawn Toczek of Hebron, Ind. Brian Diveley of Springfield, Ill., who started with Erb on the front row, led the first two laps but fell of the pace and eventually headed for the pits.

The caution-plagued event took several starts to get the event rolling. The worst incident was an eight-car pileup in turn three on one of the attempted starts.

Notes: Erb's Rayburn Race Car has a Rhyne Competition Engine and sponsorship from Thomason Express, PRC, AFCO and Petersen Aluminum. ... Erb won his second series race of the season; he won the April 11 opener at Kamp Motor Speedway in Boswell, Ind. ... Erb is locked in a tight battle with Jason Feger of Bloomington, Ill., for overall UMP points crown. Feger won the same night in another UMP-sanctioned satellite series, taking the Monster Midwest Tour event at Highland (Ill.) Speedway. ... Frank Heckenast Jr. was also second at La Salle in the previous series event at the track on Aug. 1, a race won by Ryan Unzicker of El Paso, Ill. ... Seven cars were out in the first 10 laps and 13 of 21 starters were running at the finish. ... High-running Steve Sheppard Jr. had a flat tire on the ninth lap and returned to finish 11th. ... The Northern Allstars are down to one more race on Sept. 18 at Paducah (Ky.) International Raceway.