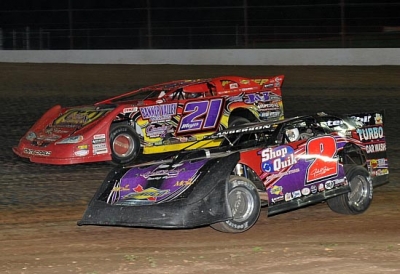 WHEATLAND, Mo. (Aug. 22) — Hall of Famer Billy Moyer of Batesville, Ark., won dozens of O'Reilly Midwest LateModel Racing Association events early in the history of the 21-year-old tour, and he dropped back in on the tour Saturday at Lucas Oil Speedway for another dramatic victory. Rallying from his 14th starting spot to take the lead with two laps left, Moyer earned $3,000 at the state-of-the-art dirt oval for his 34th career MLRA triumph. | Slideshow

Reigning series champion John Anderson of Omaha, Neb., was second in the 40-lapper after leading laps 34-38, but that was good enough to move into the series points lead over Al Purkey of Coffeyville, Kan., who struggled to a 15th-place finish. Dave Eckrich of Oxford, Iowa, was third followed by Brad Looney of Republic, Mo., and Terry Phillips of Springfield, Mo.

Denny Woodworth of Mendon, Ill., started on the pole with Eckrich charging into the early lead. The quick-starting Moyer was up to third by the ninth lap and when Eckrich began battling traffic midway through the race, Anderson and Moyer chased down the leader. Anderson overtook Eckrich on the 34th lap, but Moyer slipped past Anderson with two laps remaining for the victory.