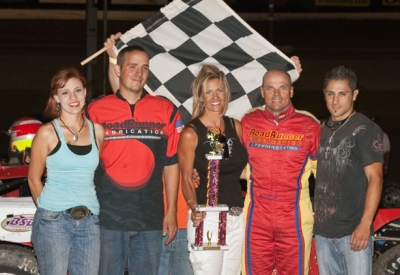 DODGE CITY, Kan. (Aug. 15) — Five-time series champion Kelly Boen of Henderson, Colo., continued his domination on the O'Reilly National Championship Racing Association by lapping the field for a victory at Dodge City Raceway Park. The polesitting Boen earned $2,500 for his ninth NCRA victory of the season, fourth in a row and eighth in the past nine. | Slideshow

Fifth-starting Bryant Goldsmith of Corning, Iowa, was within a half-track margin of Boen with six laps remaining in the 30-lapper, but engine problems forced him out.

Mike Wiarda of Aurora, Neb., finished second followed by Jason O'Brien of Omaha, Neb., and series points leader Kyle Berck of Marquette, Neb., who had a flat tire on the first lap.

The race was slowed by a single lap-one caution for outside front-row starter Jake Neighbors, who drifted high in turns three and four on the first lap and came to a stop. He eventually dropped out with a 14th-place finish at the picturesque 3/8-mile oval in western Kansas.

Notes: Boen's Rocket Chassis has a Jay Dickens engine sponsored by Road Runner Fabrication and Peterson Fluid Systems. ... Kyle Berck leads the series with 4,160 points over Boen (3,955) and Jason O'Brien (3,695). ... Two more races are scheduled to wrap up the NCRA season. First on Sept. 6 at the Belleville (Kan.) High Banks and Sept. 26 at I-80 Speedway in Greenwood, Neb.