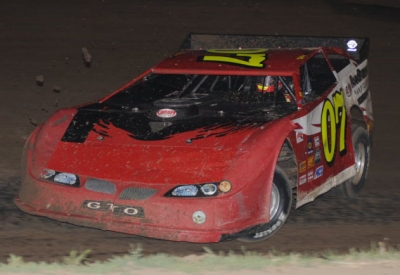 McCOOL JUNCTION, Neb. (Aug. 7) — Red-hot Kelly Boen of Henderson, Colo., took the lead from Al Purkey of Coffeyville, Kan., on the sixth lap and led the remainder of the 25-lap King of the Hill Late Model Nationals opener at Junction Motor Speedway. The five-time series champion earned $2,000 for his sixth victory in his last seven starts on the O'Reilly National Championship Racing Association. The event was co-sanctioned by the O'Reilly Midwest LateModel Racing Association. | Slideshow

NCRA points leader Kyle Berck of Marquette, Neb., led the first three laps, but Purkey swept around Berck and Boen with a high-side move to take command on the fourth lap. Boen dropped Berck to third on the fifth circuit and took the point a lap later for a lead he'd never give up.

Berck and Purkey swapped the second position a few times the rest of the way with Purkey finally getting the spot. Berck was third while a pair or provisional starters advanced 20 positions apiece to round out of the top five. Denny Woodworth of Mendon, Ill., started 24th and Joe Kosiski of Omaha, Neb., started 25th.