Henry drives something borrowed to victory 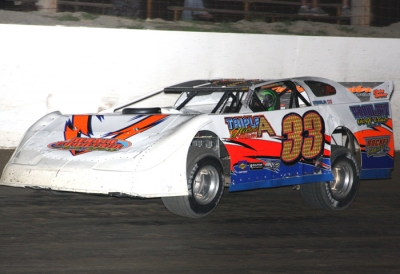 WAUSEON, Ohio (Aug. 1) — A night when Jon Henry simply hoped to salvage his Sunoco American Late Model Series points lead turned out even better at Oakshade Raceway. The 22-year-old driver from Ada, Ohio, extended his lead in the title chase with a 30-lap victory in a borrowed car, earning $2,000 for his second ALMS triumph of the year. | Slideshow

Henry suffered engine problem in his regular No. 1 Halcomb Racing ride during hot laps, but Bryan Koebbe of Adrian, Mich., was generous enough to give up his seat at Henry. Henry started on the tail of his heat, won the prelim, then led the last half of the feature for his third overall victory at Oakshade in 2009.

The fourth-starting Henry was followed to the checkers by polesitter Tyler Boggs of Warsaw, Ind., who led the first 14 laps of the main event. Seventh-row starters Dan Wallace of Toledo, Ohio, and Casey Noonan of Sylvania, Ohio, were next across the stripe with ninth-starting Rick DeLong of Whitehouse, Ohio, rounding out the top five.

Boggs was in command through 14 laps before Henry slipped in front, leaving Boggs to battle with sixth-starting Rusty Schlenk of Jackson, Mich., for second. Schlenk got past Boggs and chased Henry down using the high groove. Henry also moved higher on the track and began to stretch his leading margin.

Third-starting Rich Neiser of Fruitport, Mich., moved up to challenge Schlenk for second and the drivers got together for a double spin, drawing a lap-26 caution and knocking them both from contention. Henry held on the final four laps for the victory.

Notes: Jeg's and the University of Northwestern Ohio are Henry's regular sponsors, but Koebbe's No. 33 Rocket Chassis is sponsored by Triple A Glass, Magic Fountain Auto Wash and Woodlawn Golf Club. ... Henry's first series victory came May 30 at Fremont (Ohio) Speedway. ... Next up for ALMS competitors is an Aug. 21-22 weekend in Michigan with a pair of first-time series tracks, Winston Motor Speedway in Rothbury and Merritt Speedway.