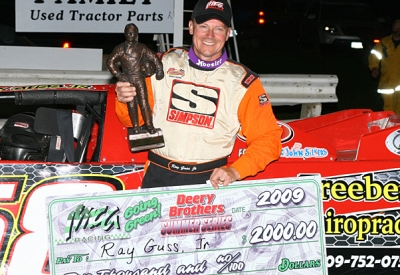 After topping Wednesday’s main event at Highway 3 Raceway, Guss started outside Zrostlik on the front row at Maquoketa and shot to an immediate lead he’d never relinquish or be seriously challenged for.

Quickly back in the fast line following the re-start, Guss was into lapped traffic again by lap 32. Neal was right behind to lap 40 before falling off the pace and having to hold off Ryan for second while Guss took his career 14th Deery win by a straightaway.

Aikey, winner of the second consolation, maintained his grasp on the series point lead with an eighth place finish. Nine drivers saw their first main event action of the 2009 tour at Maquoketa.

The eight events held in July were the most during a calendar month in the series’ 22-plus seasons. The previous high of six had been set in September of 1998 and matched in April of 2005.

The series next heads from familiar dirt to asphalt for the annual Dirt At The Downs program on Wednesday, Aug. 5 at Hawkeye Downs Speedway in Cedar Rapids, Iowa.