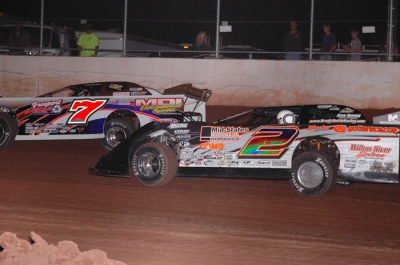 SUPERIOR, Wis. (July 30) — Ohio invader Matt Miller made it 2-for-2 on the World Dirt Racing League with a Wednesday night victory at Superior Speedway. The polesitting Miller, of Waterville, Ohio, led all 35 laps for a $3,500 payday to add to his $5,000 victory the previous night at North Central Speedway in Brainerd, Minn. | Slideshow

Miller faced his stiffest challenges from fifth-starting Brady Smith of nearby Solon Springs, Wis., who went from fourth to second following a lap-nine restart and put pressure on Miller. Smith pulled alongside several times as the race ran caution-free the rest of the way, but Miller held on for the victory at the half-mile oval. Smith was second followed by top WDRL rookie Chad Mahder of Eau Claire, Wis., outside front-row starter Darrell Nelson of Hermantown, Minn., and Al Purkey of Coffeyville, Kan.

Notes: Miller's Moring Motorsports No. 7 is sponsored by MDI Environmental Systems and Freeport Recycling Center. ... Eric Pember and Justin Fegers rallied from deep in the field and battled for sixth, with Fegers taking the position. ... The 39 cars was the biggest car count of the season for 2009.