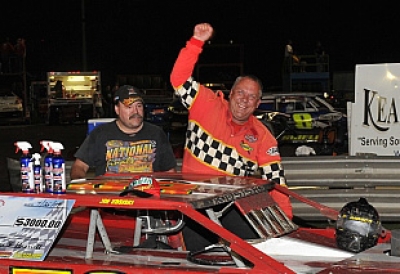 CORNING, Iowa (July 25) — Joe Kosiski of Omaha, Neb., is spending much of his time these days helping 18-year-old son Andrew Kosiski getting his Dirt Late Model career rolling, but 51-year-old Dad proved he's not quite done yet.

Earning his first touring victory in more than seven years, the elder Kosiski led all 30 laps Saturday at Adams County Speedway for a victory co-sanctioned by the O'Reilly Midwest Late Model Racing Association and O'Reilly National Championship Racing Association. The outside front-row starter earned $3,000 in front of a huge crowd. | Slideshow

"We just keep pushing and pushing and I'm glad that we got another one before retirement," said Kosiski, a 2008 inductee into the National Dirt Late Model Hall of Fame and veteran of more than 30 years of racing. "This means a whole lot to me being a co-sanctioned event. The competition here is phenomenal."

Kosiski, who owns six major NASCAR championships for his weekly racing, last won a major touring event in the 2002 season opener on the World Dirt Racing League. His previous MLRA and NCRA victories came in the 2000 season.

To secure the victory, Kosiski had to hold off a late charge from Kelly Boen of Henderson, Colo., who started outside the seventh row and rallied to second, running out of laps at the finish in gunning for his fifth consecutive NCRA victory.

Mike Collins of Council Bluffs, Iowa, finished third ahead of former track champion Chris Spieker of Massena, Iowa. Denny Eckrich of Tiffin, Iowa, rounded out the top five in the second of a three-race MLRA-NCRA tripleheader weekend. Boen won the weekend opener Friday at Park Jefferson (S.D.) Speedway and Sunday's event at I-80 Speedway in Greenwood, Neb., wraps up the swing.