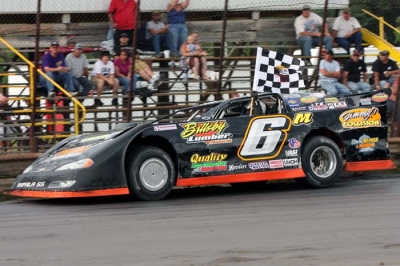 MERRITT, Mich. (July 18) — Polesitter Dona Marcoullier of Houghton Lake, Mich., raced to a 40-lap victory in the 21st annual Wood Tic at Merritt Speedway, giving him a sweep of the track's biggest events. Marcoullier, who won the Who 55 at Merritt last month, earned $4,000 in a race pushed back to Sunday afternoon because of rain. | Slideshow

Marcoullier jumped into the lead at the outset under sunny skies and led 19 laps. But Epling got under him in turns three and four to take the lead on the 20th lap as Seder and Pomeroy charged toward the front. A lap-29 caution appeared when Scott Baker's driveline broke, bunching the field. Marcoullier used the restart to regain the point, and he led the rest of the way to become the third driver to win back-to-back Wood Tics in 21 years.