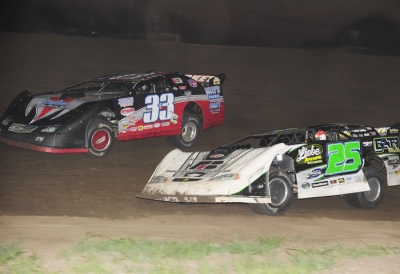 ALBION, Neb. (July 12) — There's nothing like a flag-to-flag victory to lighten the mood on a long racing trip where racing teammates might get a little crabby. Al Purkey boosted the spirits on his Bill Koons-owned team Sunday at Boone County Raceway by leading all 50 laps for his second World Dirt Racing League victory of the season. | Slideshow

"This is the fifth night in a row for us," Purkey said, "and we're all getting on each other nerves just a little, and we've still got a couple more to go before we go home. This makes it a little easier."

Purkey started on the pole and earned $5,000 in outrunning fast qualifier John Anderson of Omaha, Neb., and series points leader Chad Simpson of Mount Vernon, Iowa, who started outside the front row. Tim Isenberg of Marshfield, Wis., and Dave Eckrich of Cosgrove, Iowa, rounded out the top five.

Purkey set the pace from the outset followed by Simpson, Anderson and Kyle Berck of Marquette, Neb. Isenberg dropped Berck to fifth and Simpson was reeling in Purkey when a lap-16 caution bunched the field.

A lap-23 caution slowed the action again with Purkey edging away on the restart. As the frontrunners worked lapped traffic, Simpson got together with a lapped car on the backstretch, brushing the wall and dropping to third behind Anderson. But Anderson couldn't catch Purkey, who cut into Simpson's points lead with the victory.

Notes: Purkey's Rocket Chassis is sponsored by Billy's Cafes and TaylorMade Proformance. ... Next up for WDRL competitors is a Monday special at Mineral City Speedway in Fort Dodge, Iowa. ... The 40-lapper at Mineral City has an extra $5,000 in prize money thanks for sponsorship from Mobil 1. The winner will receive $6,800 with the rest of the money spread among the second- through fifth-place finishers. ... Also, the first 1,000 fans through the gates receive a free T-shirt courtesy of Mobil 1.