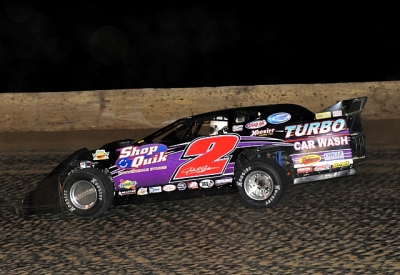 Vaughn, a five-time MLRA champ who started outside the front row, settled for second with Tommy Elston of Keokuk, Iowa, in third. Mark Burgtorf of Quincy, Ill., and polesitter Mark Voigt of Marine, Ill., rounded out the top five in the 40-lapper slowed by three yellow flags.

Jeremiah Hurst of Dubuque, Iowa, broke an engine on the 18th lap, Jeremy Kelley of Walnut Grove, Mo., got into the wall on the 21st lap.