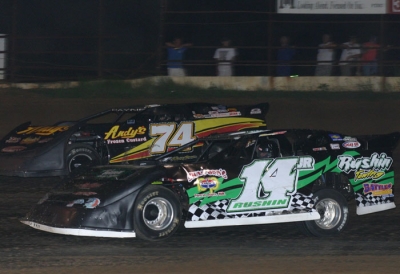 LEBANON, Mo. (July 10) — Rookie Eric Turner of Springfield, Mo., overtook four-time series champion Terry Phillips of Springfield amid traffic on the 26th lap at Midway Speedway and raced to his third victory of the season on the O'Reilly MARS DIRTcar Series. Turner's victory paid $2,500 ties him with Wendell Wallace of Batesville, Ark., as the winningest series driver in 2009. | Slideshow

Polesitter Shane Essary of Aurora, Mo., led the first lap before Phillips, who started outside the front row, took command. Phillips held the lead as most of the cars filtered into the lower groove at the 3/8-mile oval.

Phillips, however, moved up a lane trying to put a lap on Wesley Briggs, and Turner slipped underneath to make the lap-26 pass. Phillips fought back two laps later to regain the lead, but a lap-28 caution for Jeremy Payne's spin negated the pass, restoring Turner to the point.

Cautions on laps 32 and 33 delayed Turner's victory, but he held on to take the checkered flag ahead of Phillips and Jack Sullivan of Greenbrier, Ark. Hometown driver Brandon McCormick was fourth and Justin Wells of Aurora rounded out the top five, one spot ahead of Essary.