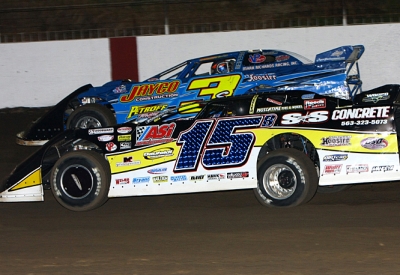 FARLEY, Iowa (July 7) — Brian Birkhofer of Muscatine, Iowa, overtook Will Vaught of Crane, Mo., on the 28th lap and led the rest of the 50-lap Tornado Tuesday special event at Farley Speedway. The third-starting Birkhofer pocketed $10,000 for the unsanctioned victory on the fast and tacky half-mile oval. | Slideshow

Several drivers had tire problems during the race, and Birkhofer was no exception as his left-rear tire was deflating even as he celebrated in victory lane.

Vaught, the night's fast qualifier, ended up spinning out after being passed by Birkhofer and finished 19th.

Several drivers pitted during the cautions, including Shirley, and 11 cars were on the track when the checkered flag fell.