Korte turns back Erb, gets UMP win at Danville 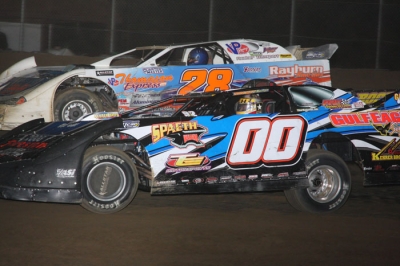 Erb hounded Korte over the final stages of the 40-lapper, nearly pulling alongside a few occasions in finishing second at the quarter-mile oval. But while a high-flying Erb tried to make the high groove work with an unorthodox line, Korte stuck with the low groove and took the checkered flag first.

Korte earned $6,000 for the victory and boosted his points lead to nine from four with five tour races remaining beginning Tuesday at Shepp's Speedway in Alexander, Ill. Unofficially, Korte has 1,235 points and Erb has 1,126 as they threaten to make it a two-driver battling in the final week of the month-long tour.

Polesitter Jeep Van Wormer of Pinconning, Mich., led the first nine laps, then jumped the cushion a few times and dropped back to fourth before stopping on the backstretch to draw a lap-23 caution. He returned to finish ninth.

Van Wormer led at the outset from the high groove with Korte and Unzicker in pursuit down low. After a lap-two caution for debris, the fifth-running Terry Casey of New London, Wis., spun on the restart in turn four to draw another caution.

Before the ensuing restart, officials penalized Babb for jumping the previous restart, dropping him two spots and far back in the pack.

Van Wormer never had a chance to get comfortable up front with Korte all over him through the early stages, eventually slipping past on the 10th lap. Van Wormer jumped the turn-three cushion and fell to fourth two laps later while Unzicker began turning up the heat on Korte.

Just before the halfway point, Unzicker nosed in on Korte while Erb began his first forays into the high groove. Korte was in danger of losing the lead to Erb amid traffic when a lap-19 caution appeared for the flat tire of Aaron Ricketts.

Korte led Unzicker, Erb, Van Wormer and Feger back to green, but Van Wormer stopped four laps later to draw the final caution. He pitted and returned while that moved Babb up to fifth for the final restart.

Erb went back to work in the high groove, moving around Unzicker on the 24th lap and trying to duplicate the move on Korte. Korte built his most comfortable lead with 10 laps remaining, but in the waning laps, Erb closed back in on Korte and was able to drive through the middle of turns three and four to pull alongside the low-running Korte just before the frontrunners took the white flag.

But Erb didn't get a similar run on the last lap, and Korte won the race to the checkers for his second series victory of 2009 and 12th of his career.

Correction: Fixes Donny Walden instead of Dan Walden in feature; fixes Casey's spin to turn four instead of three.

After a lengthy break for a fireworks display, the feature drivers are being introduced about 10:50 p.m. The feature should start shortly. The moisture appears to be coming back in the track. Most drivers chose the softest tire compounds (LM-20) for the right rear, but several chose the hardest (LM-40), including a few up front.

Daren Friedman used the high groove to reel in race-long leader Steve Sheppard Jr. and win the B-Main in the final laps. The low-running Sheppard tried to answer Friedman's move but finished just behind in second, also transferring to the main event. Richie Hedrick, penalized two spots for jumping an early restart, raced from fifth back to third but never could catch the frontrunners after taking third from Jimmy Dehm. It took several starts to get the race rolling, then a turn-four pileup that included Dan Walden, Cory Rolfe and Scott Bull halted the action before the race's midpoint. Derek Chandler finished fifth after starting on the tail because he was late to the track, missing the initial start; his team had been scrambling to change transmissions, crew chief Mario Vietti said.

In the least contested heat, polesitter Rodney Melvin raced to victory with Frank Heckenast Jr. barely keeping touch. Finishing third but far behind the frontrunners was Kevin Weaver while Scott Schmitt pressured Weaver much of the way in finishing in the fourth and final transfer spot. Schmitt transferred to his first feature since Charleston on June 23. Derek Chandler was fifth. Mitch Lankford pulled his smoking car to the infield in the early laps and Tyler Reddick also pulled off after getting into an infield tire barrier; Reddick loaded up.

Jeep Van Wormer became the first poleistter to win a heat, outrunning third-starting Brandon Sheppard for the victory. Front-row starter Donny Wallden was further back in third while Brandon Thiirlby was fourth to advance to his first Summernationals feature of '09. The race's lone caution appeared on the initial start for a Don Hilleary spin in turn one. Bobby Pierce pulled his crate engine-powered car to the infield early after smoke appeared.

Outside front-row starter Randy Korte led a three-car breakaway along with polesitter Terry Casey and Shannon Babb as they locked up the top three shots. Casey took a few shots at Korte, and Babb took stabs at Casey, but they crossed the line in the same order they ran most of the race. Aaron Ricketts finished far behind in fourth, but far ahead of fifth-finishing Jimmy Dehm.

Outside front-row starter Ryan Unzicker got the jump on polesitter Dennis Erb Jr., then fought off repeated challenges by Erb for the victory in the 10-lapper. Young Kentuckian Dustin Linville was third and Jason Feger got the fourth and final transfer spot. Seventh-starting Steve Sheppard Jr. held a transfer spot early but faded to fifth. Two starts were called back, first when Erb spun in turn one and then when Dillan White stopped in turn four

Terry Casey of New London, Wis., was the fastest qualifier overall among 35 cars at Vermilion COunty Speedway for the 19th leg of the UMP DIRTcar Summernationals. Casey turned a lap of 13.296 seconds on the quarter-mile oval to earn the pole position for the second heat race.

Series points leader Randy Korte of Highland, Ill., has a four-point edge on two-time and reigning series champion Dennis Erb Jr. of Carpentersville, Ill., heading into Sunday night's event. ... Two-time series champion Shannon Babb of Moweaqua, Ill., is fourth in the standings, 109 points behind Korte, and is gunning for his third straight series victory. Babb won Thursday at Macon (Ill.) Speedway and Friday at Quincy (Ill.) Raceway. Saturday's event at I-55 Raceway in Pevely, Mo., was rained out. ... Among series newcomers at Danville is 14-year-old Tyler Reddick of Corning, Calif. (he races out of DuQuoin, Ill.), a rookie contender on the World of Outlaws Late Model Series. ... Back on the series for the first time since opening night is 18-year-old Dustin Linville of Bryantsville, Ky., last year's track champion at Ponderosa Speedway in Junction City, Ky. ... The month-long series takes a Monday break before heading into its final five races beginning Tuesday at the new Shepp's Speedway in Alexander, Ill. ... Dennis Erb Jr. and Jimmy Dehm both had to be pushed back to the pits following time trials. ... Kenny Carmichael's car shut down entering turn one on his time trial lap and he coasted to the pits. ... Cory Rolfe spun in turn four on his qualifying lap. ... Kevin Weaver's engine didn't sound quite right during his time trial lap.