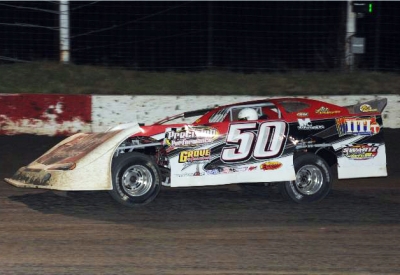 GREENWOOD, Neb. (July 2) — Regaining the lead with eight laps remaining, polesitter Denny Eckrich of Tiffin, Iowa, earned $4,000 at I-80 Speedway for a co-sanctioned victory that launched the three-race Freedom Tour.

Eric Turner of Springfield, Mo., started outside the second row and finished second while consolation race winner Terry Phillips of Springfield advanced 14 positions to finish third. The sixth-starting Goldsmith of Corning, Iowa, ended up fourth while eighth-starting Kelly Boen of Henderson, Colo., rallied from the rear after an early caution to round out the top five on a night when 32 of 67 entrants started the main event.

At the race's outset, Eckrich took command with Turner second and outside front-row starter Steve Kempt dropping to third. The frontrunners quickly caught the back of the field before a lap-14 caution waved for a slowing Aaron Seabaugh, and Boen was sent to the tail for stopping on the track.

On the restart, Turner fought past Eckrich to lead the 15th lap, but Eckrich was back out front on lap 16 as Turner, Kyle Berck, John Anderson and Phillips gave chase. Another caution on lap 23 for a frontstretch spin by Bill Koons bunched the field, and four laps later Kempt spun for another yellow.

Turner was out front for the lap-27 restart with Eckrich and Phillips in pursuit, but it was GoldSmith who turned up the heat, advancing from fourth to the lead over a two-lap stretch. Goldsmith (low groove) and Turner (high groove) battled up front with 10 laps remaining when Chris Spieker lost control to draw a red flag a Spieker's car nearly got upside down.

On the restart, Eckrich reasserted his No. 50 and took the lead on lap 32, riding the cushion to victory over Turner and Phillips.

Notes: Eckrich's winning machine is Swartz Race Car sponsored by Precision Performance andï¿½ Iowa-Illinois Taylor Insulation. ... The night's action was marred by John Hampel's wild, rolling crash down the backstretch in his heat race. The Nodaway, Iowa, driver was able to climb from the wreckage but he was taken to a nearby hospital to be checked out. ... Kyle Berck ran among the leaders much of the way but pitted under the lap-30 red flag to fall from contention. ... Among drivers failing to make the feature: John Kuchar, Larry Clawson, Bo Egge, Craig Preble, Chris Smyser, Andrew McKay, Scott Koskovich, Ted Martin and Jeep Berry. ... Next up on the Freedom Tour is a Friday event at Park Jefferson (S.D.) Speedway. The MLRA-NCRA weekend concludes Saturday at Adams County Speedway in Corning, Iowa.