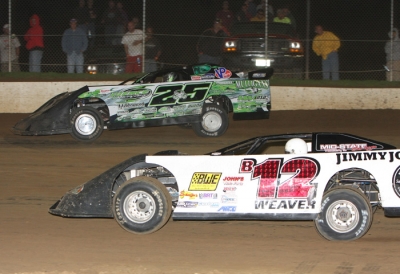 Jason Feger (25) edges ahead of Kevin Weaver (B12) at Peoria. (mikerueferphotos.photoreflect.com)

Winless at the track in the elite division, Feger finally broke that streak of futility on a cool, overcast Tuesday evening on the 15th leg of the UMP DIRTcar Summernationals. Feger used his high groove to dispense of low-running polesitter Kevin Weaver of Gibson City, Ill., midway through the 40-lapper, then fought off challenges from high-running Jeep Van Wormer of Pinconning, Mich., to secure the $6,000 victory.

"This is real big," said a smiling Feger, who notched his second Summernationals victory of 2009. "Honestly, I can't believe it took me this long to win a Late Model race here. We used to pretty much win a lot here in the sportsman car, all the time. Then we didn't race Late Models here regularly; we just came for the special events. I'd just never been able to put it together here.

"We've had a couple of top-five runs, but never really had a good car. I don't know, it just feels really good. We had a big fan-base here, the track's 35 minutes from my house. It's always been a great track with a lot of good fans. Every time we come here it packs the stands whether it's a special or a weekly show. And it's just nice to come here and get a win at what used to be one of my home tracks."

What might've been a late-race showdown in the high groove turned out to be a runaway for the 31-year-old Feger when Van Wormer packed his right-rear wheel full of mud in the final laps, causing a severe vibration that forced him to ride out the finish slowly in the bottom groove. Van Wormer had plenty of room to hold on to second with Weaver third. Eighth-starting Frank Heckenast Jr. was fourth followed by series points leader Randy Korte, who extended his lead over seventh-finishing Dennis Erb Jr. of Carpentersville, Ill. UMP's Sam Driggers said Peoria's feature results were unofficial pending a ruling that would be made by Wednesday; he didn't say which driver was affected.

With Weaver committed to the low groove — "I hope it's on the bottom all night," the 46-year-old said moments before the green flag — Feger ended up in his favored high groove at the outset, not sure if the long way around was going to be fast enough.

Three aborted restarts kept either driver from getting going as Terry Casey spun between turns three and four, then Shannon Babb broke a fifth-arm that dug itself into the backstretch so deep that track workers needed a wrecker to tug it out. A third start was called back for a six-car pileup in turn one that knocked Wes Steidinger and Brian Harris out.

With officials calling for a single-file start, Feger didn't stay single file long as he immediately went to the high side. Weaver stayed out front five laps, but Feger's momentum off a tricky turn four nosed him into the lead on the sixth lap. Weaver stayed mostly side-by-side though and went back ahead on the 11th lap, three laps before the final caution for a Casey-Steve Sheppard Jr. tangle on the frontstretch.

"At the beginning of the race there, I was probably a little too aggressive, and after that (lap-14) yellow, I told myself, 'Just calm down and try to roll around it smooth.' I just tried to focus really hard on it and it worked. I started picking up on Kevin a little bit at a time," Feger said.

The Weaver-Feger battle resumed with the frontrunners in a dead heat on the 19th lap before Feger took control for good at the crossed flagsticks. With Weaver's groove getting slower, the fourth-starting Van Wormer, last year's series winner at Peoria, followed Feger past to grab second and turned up the heat on the leader. Van Wormer nearly pulled ahead in turn two at one point, but never could complete the pass.

"Jason was getting up there on the top so I had to move up there and follow him," Van Wormer said. "I just could never get it turned down and get underneath him. There was a couple of times I thought we could and was getting close enough, but lapped traffic was a little bit of an issue.

"With like three laps to go, I went in there and hit the cushion down here in (turn) four, and it pushed the whole (wheel) cover and everything in, and just packed it full of mud and started vibrating really, really bad. I just went to the bottom and just tried maintaining and holding on."

Feger, whose choice of an enduring harder tire paid off with a 26-lap stretch of green-flag racing, pulled away for the victory.

"I think that long run at the end finally went my way, and I just got to rolling real good, and (Weaver) must've faded a little bit," Feger said. "I kept seeing Jeep poke is nose down there, and you never know what he's going to do. Once I saw his nose, I tried to pick it up a little bit and be on that edge, and just finally put it together.

"I really didn't think the top would stay like it did. It was good ... we just kept our momentum rolling up there. It was good. It was good racing, top and bottom, it had to be a good show for he fans."

Feger's victory unofficially pulled him within 64 points of the series-leading Korte on a tour where winners receive 85 points. The tour heads to Highland (Ill.) Speedway on Wednesday for a 40-lap feature paying $6,000 to win.

Polesitter Ryan Unzicker led all the way to transfer the main event along with fifth-starting Brandon Sheppard, who hugged the inside of the track along with Unzicker throughout the race. Ninth-starting Eric Smith charged to finish third with Charley Hess and Kyle Logue, the C-Main winner, rounding out the top five. Three cautions in the final two laps delayed the race's conclusion. It appears Duane Chamberlain and Rusty Schlenk are among drivers in line for provisional starting spots.

Kyle Logue lead four cars transferring to the B-Main with a victory in the C-Main. Also moving on to the B-Main was Rich Bell, Tommy Duncan and Derek Chandler. They'll start on the last two rows of the B-Main, which sends two cars to the main event.

In the least eventful heat, polesitter Jeep Van Wormer took command from the outset and cruised to victory, outrunning third-starting Frank Heckenast Jr. for the victory. Heckenast was a half-straightaway behind much of the race but put some pressure on Van Wormer on a late restart. Outside front-row starter Brian Harris was third and Daren Friedman rebounded from a tough night at Farmer City to get the fourth and final transfer spot. Russ Adams stopped on the frontstretch on the eighth lap to draw the heat's lone caution.

Getting rolling early in the high groove, fourth-starting Jason Feger roared into the lead on the third lap and cruised to a victory. Behind him was a wild battle for second among polesitter Terry Casey, Randy Korte and Tim Lance as Casey and Korte took turns trying to cut through the edge of the infield in turn one. Korte eventually secured the spot while Lance worked the high groove past Casey for third. Casey settled for fourth. Rusty Schlenk had fifth locked up, but appeared to lose power on the backstretch of the final lap. Charley Hess dropped him to sixth at the checkers. Feger's first few laps were impressive. He rode the cushion into second by slipping by Casey on the backstretch, then on the next lap switched up and dove under the early leader Korte in turn three. He had enough traction to get the spot and never looked back. Derek Chandler brought out a yellow on the first attempted start.

Outside front-row starter Kevin Weaver edged away from polesitter Wes Steidinger early and raced to a 10-lap victory. Former track champion Todd Bennett ran a steady third until Steve Sheppard Jr. turned up in the heat in the closing laps with a high-side run, but Bennett fended off the charge. Sheppad got the fourth and final transfer spot. Scott Schmitt spun between turns one and two to draw a lap-seven caution and another caution appeared on the restart when the field obliterated the restart cone.

Working polesitter throughout the race, third-starting Rodney Melvin overtook polesitter Shannon Babb with two laps remaining for his series-leading eighth heat race victory of the Summernationals. Babb was all over Melvin the rest of the way but settled for second while fifth-starting Dennis Erb. Jr. rebounded from a poor start to finish third. Outside front-row starter Donny Walden got the fourth and final transfer spot, just ahead of Ryan Unzicker. The first start was scrubbed when sixth-starting Brandon Sheppard pulled up on the backstretch.

Lowering the track record at Peoria Speedway, Shannon Babb of Moweaqua, Ill., set fast time for the second consecutive night on the UMP DIRTcar Summernationals. Babb's time of 12.119 seconds topped 39 qualifiers at the quarter-mile oval for the 15th leg of the month-long series and put him on the pole position for the first heat.

Other drivers topping qualifying groups to earn poles for heat races: Wes Steidinger (12.508) of Fairbury, Ill.; Terry Casey (12.512) of New London, Wis.; and Jeep Van Wormer (12.613) of Pinconning, Mich. Four heat races will send four drivers apiece to the main event. The C-Main sends four drivers to the B-Main, which sends two drivers to the main event. Three provisional starters round out the 21-car field for the 40-lap feature paying $6,000 to the winner.

Randy Korte leads the series with 800 points over Dennis Erb Jr. (783). ... Jeep Van Wormer of Pinconning, Mich., won last year's event at Peoria. ... The previous track record was 12.409 seconds set by Wes Steidinger in September 2008. ... Peoria's track surface got new clay for 2009. ... Among series newcomers are Bill Kettering, Jason Weyeneth, Brian Crebo, John Gardner Jr. and Jason Jaggers, driving a former Ryan Dauber No. 64. ... UMP announced earlier Tuesday that it's dropping its sanctioning of Kankakee County Speedway in Kankakee, Ill., saying the track failing to live up to financial obligations for the sanctioning agreement. The track hosted the second Summernationals event June 12; the event's purses were paid by UMP, the press release said. The track's website says the track has been closed. ... Terry Babb is driving the No. 91 driven previously on the series by Kyle Logue, who is in his No. 21L at Peoria.