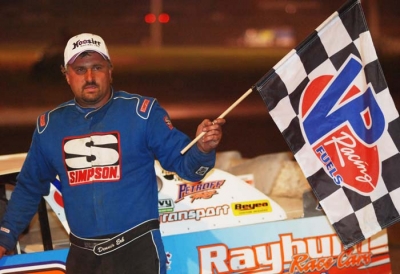 The 36-year-old Erb stretched his lead to nearly a half-lap margin at the quarter-mile oval, keeping a cushion of lapped cars between his No. 28 and Babb's No. 18 throughout the second half of the 40-lapper in marching to his third series victory of 2009 and 13th of his career.

Babb notched his third second-place finish in the last five series events while Summernationals points leader Randy Korte of Highland, Ill., ran third throughout the race. Eric Smith of Bloomington, Ill., was fourth and ninth-starting Brian Shirley of Chatham, Ill., rounded out the top five on the makeup of a June 19 rainout.

Erb picked up 10 points on Korte with the victory, and with 11 scheduled events remaining, Korte has 900 points to lead Erb (883), Jason Feger (816) and Kevin Weaver (808), who led the points earlier in the series but has struggled four of the past five events.

Babb started on the pole for the second straight night, but with Erb to his outside, the front-row starters immediately switched their positions on the track.

"Shannon likes running the high side, and I usually like running the low side," said Erb, who took the lead from Babb on the sixth lap. "We went in the corner and he slid high up in front of me, so I had to turn and get back underneath him. The car just started working good there. We ran side-by-side for a long time and finally we were able inch away a little bit."

Erb inched away at first, then starting gobbling up racetrack to pull away from Babb, who edged down on the track as racing eventually filtered into the faster low groove in the race's late stages.

By the 22nd lap, Erb was running away through lapped traffic and had four cars separating him from Babb. Erb's near half-track margin at lap 25 was cut slightly the rest of the way, but Babb never got a whiff of the winner after the first half-dozen laps.

"We just needed just a little bit more," said Babb, a two-time series champion who struggled early in 2009 but has four of his five top-five finishes in the past seven races. "Dennis was really good. We're sneaking up on it. One of these times we're going to get us one."

Korte started outside the second row and ran third the whole way while Shirley briefly held the fourth spot before giving it back to Smith. Kyle Logue of Cisco, Ill., started third and ran up front early before fading to finish 11th. Bill Frye of Greenbrier, Ark., a Summernationals regular in the 1990s when he won three straight series events at Farmer City, started 13th and finished eighth.

Erb lapped all but nine cars in the non-stop event.

Fifth-starting Frank Heckenast Jr. rallied from third to first during a two-lap stretch and led the final three laps of the B-Main to transfer to the feature. Duane Chamberlain led most of the way over Jeep Van Wormer, but a high-running Heckenast went around both of them for the victory. Chamberlain held on for second with Van Wormer third as the top three ran far ahead of the field. Polesitter Rusty Schlenk faded to finish seventh whlie fellow front-row starter Tim Lance hung with the leaders early but gave up his high groove run by pulling to the pits midway through the race. The race required two restarts after a pair of tangles between Richie Hedrick and Jon Rogers.

For the second night in a row, Shannon Babb drew the pole position for a Summernationals feature. The Farmer City heat winners drew for the first two rows of the main event with Babb startling out front with Dennis Erb Jr. Kyle Logue starts inside the second row while Randy Korte starts fourth. Coming up is the B-Main with Rusty Schlenk and Tim Lance scheduled to start on the front row.

With polesitter Steve Sheppard Jr. going to the high groove, third-starting Kyle Logue took the opening and raced into the lead. Logue faced pressure from Sheppard and Rodney Melvin much of the race but edged away after a mid-race restart to win by a half-straightaway. Sheppard got second while Donny Walden, who dropped to the middle of the pack after starting outside the front row, regrouped and rallied to finish a close third. Melvin was fourth. Rich Bell's mid-race spin inside turn two brought out a yellow flag.

Fifth-starting Randy Korte asserted himself midway through the race, going from fourth to first in two laps to grab the victory. Sunday's winner at Farmer City's sister track, Lincoln Speedway, cruised the rest of the way. Third-starting Scott Bull was second while Ryan Unzicker, who won an side-by-side duel with polesitter Brandon Shepard, to take the early lead, was third after giving up his high groove for the low groove. Terry Casey was fourth as Sheppard pulled off the track in the final laps. Three starts were required to get the race going after one jumped start and a spin by Rogers.

Polesitter Dennis Erb Jr. ducked under fellow front-row starter Jason Feger on the fourth lap and raced to a victory. Erb ran the low groove through the corners while Feger mostly ran up high, nearly losing the second spot to a low-running Brian Shirley in the final laps. Shirley, who started sixth, was third while Bill Frye got the fourth and final transfer spot. Richie Hedrick slid over the turn-two banking on the second lap to draw the prelim's lone caution flag.

The event is a makeup of a June 19 rainout. ... Champion drag racer Cruz Pedregon spun on his qualifying lap. ... Among drivers on hand is Bill Frye of Greenbrier, Ark., who won three straight Summernationals events at Farmer City from 1996-98. ... The feature lineup is set by four drivers apiece from four heats, two from the B-Main and three provisional starters.