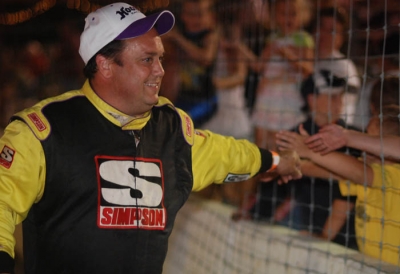 LINCOLN, Ill. (June 28) — The most consistent driver on the UMP DIRTcar Summernationals proved he can grab a checkered flag, too. Winless through the first 12 races, Randy Korte of Highland, Ill., extended his series points lead with a flourish at Lincoln Speedway, dominating at the quarter-mile oval for a 40-lap victory worth $6,000. | Slideshow | Complete Summernationals coverage

Korte averaged passing a car per lap through the race's early stages as he started eighth in the 21-car field and moved by cushion-jumping polesitter Shannon Babb of Moweaqua, Ill., on the eighth lap for a lead he'd never give up.

"I'm just glad to get a win. I just want to thank all my guys and my girlfriend. I mean, this is a hard deal to be out here every night like this. They're working hard at it, so this is awesome," said Korte, who finished sixth in points in last year's month-long grind. "Winning the deal period would be awesome. That would probably be the greatest thing I ever did."

Korte had a series-best seven top-five finishes in 11 feature starts heading to Lincoln, including a pair of runner-up finishes. When Babb outran Korte in the second heat race, it appeared Korte would be settling for a top-five run again.

Instead, Korte quickly headed for the front from outside the fourth row. He was up to second after an early caution for fourth-starting Bill Frye, who stopped between turns one and two. Korte went to work on Babb after that, and when Babb had problems with the cushion between turns three and four and briefly checked up, Korte zoomed past on the inside and began pulling away.

With green-flag racing the rest of the way, Korte built a lead of more than a straightaway on Babb while fellow front-row starter Jason Feger ran third. Most high-running drivers struggled with occasional slipups on the cushion, but Korte ran a car's-width below the muddy ring and stayed out of trouble.

Babb, however, found something in the final 10 laps, cutting into Korte's lead and drawing to within a few lengths in the race's final moments. But when he got as close as ever on lap 39, Babb again got hung up between turns three and four and lost too much ground for a last-lap run at Korte.

Babb posted his second runner-up finish in the past four series events while Feger, of Bloomington, Ill., was third. Dennis Erb Jr. of Carpentersville, Ill., the two-time reigning series champion and Korte's closest pursuer in the points, finished fourth while Eric Smith of Bloomington, Ill., rallied from 13th to round out the top five.

Next up on the series is a Monday night event at Lincoln's sister track, Farmer City (Ill.) Raceway. The makeup of a June 19 rainout pays $6,000 to the winner.

In the draw among heat winners, Shannon Babb got the pole position for the feature event with Jason Feger alongside. Brian Shirley and Bill Frye got second-row spots. Upcoming is a B-Main that will send the top two finishers to the ninth row of the feature lineup. Unofficially, provisionals will go to Terry Casey (series points) and Wes Steidinger ('08 UMP weekly points). The track provisional is uncertain.

Polesitter Shannon Babb took control early and never looked back for an easy victory in the final heat. Second-row starters Randy Korte and Kevin Weaver had a good mid-race battle for the second spot with Korte finally shaking Weaver and pulling away. Weaver faced heat from Scott Bull and Ryan Unzicker the rest of the way, with Weaver holding on to third and Unzicker edging Bull after taking the spot on the ninth lap. Brandon Thirlby and Russ Adams finish far behind.

Jason Feger cruised to victory from outside the front row to win the caution-free prelim by a full straightaway. Fifth-starting Duane Chamberlain, taking advantage of polesitter Terry Casey's early problems, quickly moved into second and held that spot most of the way. Tim Lance ran third while Kyle Logue moved up from sixth to take the fourth and final transfer spot. Daren Friedman was further back in fifth. Casey got too high twice in the first lap and a half, dropping back to fourth and even further as the race continued. He pulled to the infield on the seventh lap.

Polesitter Bill Frye went under early leader Frank Heckenast Jr. on a lap-four restart and raced to victory in his first visit to Lincoln. Rodney Melvin also followed Frye under Heckenast, who led from outside the front row and appeared to be in control before the yellow. Steve Sheppard Jr. ended up fourth, just behind Heckenast, and Derek Chandler a distant fifth. An early caution appeared when Charley Hess got sideways and Jeremy Conaway ended up spinning between turns one and two. Fifth-starting Ryan Little was also involved,

Third-starting Brian Shirley made an outside pass of polesitter Dennis Erb Jr. on the frontstretch to lead the fourth lap, then held on for the victory over Erb. Erb never gave up, edging ahead of Shirley in turn two on the final lap when Shirley lost traction. But Shirley held on for the victory over Erb while Jeep Van Wormer rallied from fifth to finish further back in third. Outside front-row starter Eric Smith got the fourth and final transfer spot.

Two-time and reigning series champion Dennis Erb Jr. of Carpentersville, Ill., topped 35 qualifiers at Lincoln Speedway to set fast time for the 13th leg of the UMP DIRTcar Summernationals. Erb posted a 13.219-second lap that was four-tenths of a second better than any other qualifier.

Erb will start on the pole of the first heat race. Other top group qualifiers on the pole of heat races: Bill Frye (13.607) of Greenbrier, Ark.; Terry Casey (13.749) of New London, Wis.; and Shannon Babb (13.949) of Moweaqua, Ill. The top four drivers from each of four heat races will transfer to the main event with two B-Main cars and three provisional starters rounding out the 21-car field.

Billy Moyer of Batesville, Ark., won't extend his three-race win streak as the six-time series champion opted the skip the event. ... Also among the missing is Scott James of Lawrenceburg, Ind., who ran the first dozen series events but headed home after a wreck and engine problems last night at Fairbury (Ill.) American Legion Speedway. ... Mark Voigt of Marine, Ill., returns to the series fresh off a Saturday victory at I-55 Raceway in Pevely, Mo. ... Brian Shirley won last year's Summernationals event, a rain-shortened race. ... Wes Steidinger's team replaced a transmission after a poor qualifying lap, trying to find a problem in the drivetrain.