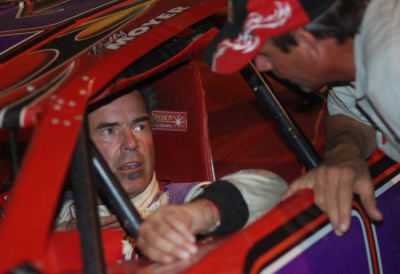 ATWOOD, Tenn. (June 25) — After the top two finishers rolled off the scales at Clayhill Motorsports Park, runner-up Shannon Babb pulled his No. 18 alongside winner Billy Moyer's No. 21 in the infield. Amid the din of engines, the drivers turned their heads and exchanged the briefest of communications about what just transpired in the 40-lap UMP DIRTcar Summernationals feature where Moyer led the final five laps. | Slideshow | Complete Summernationals coverage

"I screwed up," was the PG-amended conclusion by the polesitting Babb after he'd slipped out of the rubbered-up traction strip around the 3/8-mile oval exiting turn four on the 36th lap.

Moyer was part surprised his former de facto teammate made a critical mistake, and part satisfied his first visit to the western Tennessee oval gave him $6,000 and his series-leading 67th career series victory and third of 2009.

It was a two-car race in the late stages when Babb and Moyer cleared lapped traffic with 10 laps to go, but Babb said that keeping his car in the black-striped low groove wasn't as easy as it looked.

"I got in the lead and I just tried to park right there in that rubber, but I knew if I messed up, somebody was going to go by me, because I didn't have the traction I knew I needed," said the Moweaqua, Ill., driver, a two-time series champion. "I thought I had it there, but I just tried to drive to cautious, too straight (entering turn three) that time and got my angle wrong. I got up just far enough so Billy drove by me."

Moyer, who started fourth and got up to second when Rodney Melvin made an ill-fated attempt to pass Babb on the outside on lap 24, was thinking second place might be the best he could do.

"I kind of was working on him in those lapped cars there, and I was going to settle for second or run over him — so I was just riding there," said the Batesville, Ark., driver, a six-time series champion. "I saw his front wheels like that" — Moyer tilted his hands to the left — "and I almost thought something broke for a minute, but I think his right front got outside that rubber, and I was just set up right to get by him.

"I didn't know if he was going to be coming back down. I sort of sat there a second. You know, he couldn't get back down, so just shot on by."

Moyer flashed under the flagstand to lead lap 36 and pulled away the final few laps while Babb settled for second, but a performance he was pleased to get after struggling through most of the first nine events of the month-long, 27-race tour.

Ninth-starting Bill Frye of Greenbrier, Ark., made his first series start of 2009 a good one with a third-place finish while Melvin, of Benton, Ill., finished fourth despite leadings laps 2-5 from outside the front row before giving way to Babb. Ryan Unzicker of El Paso, Ill., started and finished fifth to halt a five-race stretch of 12th-place-or-worse finishes.

Two-time and reigning series champion Dennis Erb Jr. of Carpentersville, Ill., was sixth and unofficially moved into the points lead ahead of 13th-finishing Randy Korte of Highland, Ill., and 15th-finishing Kevin Weaver of Gibson City, Ill., who were tied atop the standings entering the race.

The fourth-finishing Melvin knows that if he would've settled into the low groove ahead of Babb on the fifth lap that he might've had his second series victory, but he blamed it on driver error

"We were good (in the high groove) for about four or five laps, and that's all it was good for," he said. "We just should've gotten down."

Frye, who has eight career Summernationals victories but none since 1998, made more progress at the front of the field than any other driver in finishing third.

"(Crew member) Jeremy (Haddox) kept telling me before the race started, he said, 'Man, it's going to be one-laned right around the bottom.' He said. 'Wait until they push and pass 'em.' (Lapped Jason) Feger held me up a little too long. I think I might've gotten Shannon if I could've been there when he pushed, but oh well. I'll take what I can get. At the rate I've been racin', I'll be happy with a third in this."

Promoter Dale Nelson announced at the drivers' meeting he plans to host another Summernationals event next year. Clayhill drew a solid crowd and an impressive car count despite drawing just four Tennessee drivers. ... Scott Schmitt broke an engine in hot laps and his father Gary is hauling his backup powerplant down from Tonica, Ill., tonight to meet them at Paducah (Ky.) International Raceway for Friday's series event. ... With Kevin Weaver failing to transfer through the B-Main, no series drivers has made all 10 events without using at least one provisional. ... Shannon Babb and Rodney Melvin are scheduled to start on the front row of the main event with Will Vaught and Billy Moyer on row two. The heat winners draw for position. ... Provisional starting spots went to Terry English (track), Kevin Weaver (series) and Steve Sheppard Jr. ('08 UMP weekly points).

Outside front-row starter Dane Dacus overtook polesitter Jason McBride on the third lap and cruised to an easy victory while hugging the low groove all the way. McBride held on for the second transfer spot while English's third-place finish gives him the track provisional. Series points leader Kevin Weaver was just behind English in fourth and will have to take a series provisional. Wendell Wallace started inside the second row but apparently broke exiting turn four on the first lap, checking up before being clipped from behind by Kevin Cole and knocked into the infield.

Donny Walden led four cars transferring to the B-Main with a victory in the C-Main. Derek Chandler was second followed by Austin Rettig and Brett Kreke, who overtook Brandon Thirlby on the last lap. Thirlby was the only other car to finish as Steven Ashby dropped out of the race. Several other drivers scratched, including polesitter Billy James. The race ended about 9:45 p.m. and the B-main should start by 10:05 or so.

Polesitter led all the way to win by more than a half-straightaway over Dennis Erb Jr., who finished just ahead of a late battle between outside front-row starter Scott James (low) and Jason Feger (high). James edged ahead to get third in the final laps while Feger for the fourth and final transfer spot while Kevin Cole was fifth. Series points leader Kevin Weaver was sixth and will go to the B-Main.

Polesitter Shannon Babb won a sidd-by-side duel with high-running Frank Heckenast Jr. to win the third heat. Heckenast, throttle-stomping on the cushion to edge ahead and lead the seventh lap, lost the point on the next lap to Babb, who himself jumped to the high side with less than two laps to fo. Front-row starter Duane Chamberlain and Terry Casey got the other two transfer spots while Wendell Wallace was fifth. The first start was halted by a yellow after a tangle between front-row starters Babb and Chamberlain in turns one and two. Babb's car ended up wedged atop the right side of Chamberlain's car, and Babb got out for a few words with his fellow front-row starter after the cars came to a stop atop turn two. According to UMP rules, they got their spots back for the restart.

Polesitter Will Vaught led all the way while fourth-starting Billy Moyer Jr. quickly got up to second and held that spot the rest of the way. As the top two pulled away. a battle among Chris Shelton, Steve Sheppard Jr. and Dane Dacus developed for the other two transfer spots. Sheppard jumped the cushion a couple of times and fell from contention while Shelton clinched the third spot. Dacus lost fourth on a single-lap dash to the finish after a late caution as last-row starter Randy Korte swept around on the outside to nip him at the line. Steven Ashby spun in turn four after the white flag fell for the only caution.

Polesitter Rodney Melvin led all the way in the low groove with Ryan Unzicker flashing across the finish line just behind him in the first heat. Bill Frye was a few lengths back in third while sixth-starting Justin Rattliff was a distant fourth in the caution-free prelim. Outside front-row starter Derek Chandler faded all the way to the back of the pack.

For the second straight night, six-time series champion Billy Moyer of Batesville, Ark., set fast time on the UMP DIRTcar Summernationals. Moyer recorded a lap of 15.049 seconds in his first visit to 3/8-mile Clayhill Motorsports Park to top 38 qualifiers for the 10th leg of the series.