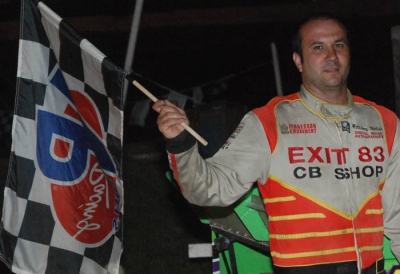 CHARLESTON, Ill. (June 23) — With a couple of near-misses, a costly spin in the opener and a scary wreck in another race, the breaks didn't fall Rodney Melvin's way through the first seven legs at the UMP DIRTcar Summernationals. But the polesitting Melvin got his first big break at Charleston Speedway, taking command and rolling to a $6,000 at Charleston Speedway after a flat tire knocked Scott James out of the lead midway through the 40-lap feature. | Slideshow | Complete Summernationals coverage

The 35-year-old driver from Benton, Ill., thinks things might've turned around with fourth career series victory, and first since 2006, as what appeared to be his series-leading third runner-up finish ended with him in victory lane at the high-banked 3/8-mile oval in eastern Illinois.

"You hate it for (James), and I wish he could've kept racing to see if we had that good've a car to pass him," Melvin said after leading the last 20 laps, but he was thrilled the victory kept him right in the points chase despite a few tough nights. "I feel confident we can win every night; you've just gotta have luck. We've had good luck. My uncle's been going to draw after heat race wins and he's been putting us on the front row, so you gotta have luck. I'd rather be lucky than good any day."

James, looking for his first career Summernationals victory during his first full-time run on the tour, was in perfect position after starting outside the front row and grabbing the lead on a tough-pass track with a rubber strip around the high side.

"I guess it's just been our year," James said. "We've had flat tires left and right. It's pretty frustrating. It's definitely disappointing knowing we had a car that good. ... it's part of it. A lot of guys got racing luck, and some guys have bad luck, and that's the way our year's been this year."

Sixth-starting Terry Casey of New London, Wis., who actually moved up to start fourth because Jason Feger's car-switch forced him to drop to the tail, scored his best series finish in second ahead of fast qualifier Shannon Babb of Moweaqua, Ill., who briefly took a spot from Casey earlier in the race. Series points leader Kevin Weaver of Gibson City, Ill., was fourth for his series-leading fifth top-five finish and Randy Korte of Highland, Ill., rounded out the top five at the first series event at Charleston since Hall of Famer Bob Pierce won in 2002. James changed tires and rejoined the single-file line to finish 14th.

Melvin, whose loose-handling Rayburn Race Car got better as the laps clicked off, didn't relax after restarting out front with 20 laps to go. He eventually pulled away to take the checkered flag by a straightaway over the Casey-Babb tussle.

"I thought Shannon was actually right behind me," Melvin said. "I didn't really know we had that big of a lead, or I would've slowed down just a little bit more there before we got into that lapped traffic."

Three cautions slowed the action, the first on lap 14 when Ryan Unzicker of El Paso, Ill., slowed with a broken power steering pump. James brought out a lap-20 yellow with his flat tire and Scott Schmitt jumped the banking in turns one and two two laps later for the final caution.

Jason Feger will give up his outside second-row starting spot because engine problems have forced him into another car. He'll start the No. M14 of Michigan driver Brandon Thirlby in the 40-lap feature. The Feger and Thirlby crews were working to prepare the car, including changing fans after the car ran too hot in the consolation race. The 3-race-old MasterSbilt has a best finish of second at Cherry (Mich.) Speedway, and Thirlby was happy to loan it to Feger. "He's been helping me out," Thirlby said of Feger. ...With the high side picking up a rubber strip, tire wear could be an issue in the 40-lapper. Donny Walden, who finished second in consolation race, said he trashed his right-rear Hoosier LM-40 tire during the 12-lapper. "It completely chunked it out," Walden said. He tried to take it easy, turning on 7600 RPMs, but the 1-race-old tire was junk. "It's going to be a survival race I think for sure," said Walden, who starts inside the ninth row. ... Polesitter Rodney Melvin had heard some drivers complain about the track conditions that saw single-file high-side racing in the consolation race, but he'll be able to live with it, he said. "I'm starting up front, so I like it. I'm a greedy bastard," Melvin said with a laugh. Melvin acknowledged that drivers — even through the first eight Summernationals events — can manage to complain about track conditions from too wet to too dry to rough and anything in between. "It's always something," he said. ... Steve Sheppard Jr. (series points) and Mike Hammerle ('08 UMP weekly points) got provisional starting spots. ... The track began an intermission about 9:25 p.m. following the modified consolation race; the starting lineup hadn't been called to the track as of 10 p.m.

Outside front-row starter Derek Chandler led all the way as the fast high groove picked up a black strip around the track. Polesitter Donny Walden was second with Kenny Carmichael Jr. and Brandon Sheppard getting the other transfer spots. (Because Charleston doesn't run Late Models regularly, it designated the fourth finishing driver in the consolation race as its provisional). Brent Kreke started outside the front row but flattened a tire in a first-lap tangle with Steve Sheppard Jr., who dropped out of the race in the final laps while running fifth.

Polesitter Rodney Melvin jumped out early and cruised to a half-straightaway victory over Terry Casey in the final heat. Kyle Logue got third, holding off Mark Voigt while Scott Schmitt — who started outside the front row and held the second spot on the first lap — faded to the fifth and final transfer spot. The heat ran caution-free, just as the first two heats did.

Outside front-row starter Scott James stayed with a middle-high groove and led every lap for the victory over polesitter Randy Korte, who also moved up in finishing five lengths back in second. Third-starting Kevin Weaver barely kept touch with the top two cars while everyone else was far behind. The battle for fourth was tight with Frank Heckenast Jr., running just inside Ryan Unzicker, nipping Unzicker at the line. Both drivers transferred to the main event.

Polesitter Shannon Babb away jumped out early, then stretched his winning margin to nearly a full straightaway at the finish over Jason Feger, who got second just ahead of Steve Casebolt. Further back was a tight battle for fourth in the closing laps between Duane Chamberlain and Dennis Erb Jr., with Chamberlain edging Erb at the line. Erb second in series points, started seventh in the nine-car heat. Erb headed for his pit stall initially before reversing course and hitting the infield scales. Feger drove straight to the scales, but his car needed a push back to the pits from a 4-wheeler.

Two-time series champion Shannon Babb of Moweaqua, Ill., winless on the UMP DIRTcar Summernationals through seven events, was the fastest among 26 qualifiers for the eighth leg of the tour at Charleston Speedway. Babb turned a lap of 15.27 seconds on the high-banked 3/8-mile oval in eastern Illinois.

Other top group qualifiers who will start on the pole of heat races are Randy Korte (15.35) of Highland, Ill., and Rodney Melvin (15.52) of Benton, Ill.

The 26 entries is a series low for 2009; the previous low was 31 cars at Quad-City Raceway. ... Of the four drivers who have won Summernationals events so far in '09, only two-time winner Dennis Erb Jr. is on hand. ... The event marks the first Late Model race at Charleston since the 2002 Summernationals event won by Bob Pierce of Danville, Ill., who frequented the track early in his racing career. ... Pierce holds the track qualifying record for Late Models at Charleston with a 14.16-second lap. ... The Northern Allstars Late Model Series ran at Charleston three times in the 2000 season with Mike Jewell, Roger Long and Steve Barnett taking victories. ... Among the most notable series newcomers at Charleston is Steve Casebolt of Richmond, Ind., who ran one of those Northern Allstars events nine years ago. Casebolt is fresh off a six-race swing on the Lucas Oil Late Model Dirt Series and plans to run at Charleston and Tri-City Speedway at Granite City, Ill., on Wednesday before heading back home. ... The Charleston event was rained out last Thursday and rescheduled for June 23, replacing a Summernationals event originally set for Mount Vernon, Ill. ... Charleston has another special event scheduled for Saturday when the O'Reilly Auto Parts Midwest All Star Winged Sprints hit the track. Fans who bring a ticket stub from the Summernationals event get $5 off the $25 general admission ticket for the sprint event. ... Charleston isn't a fairgrounds track, but it has a fairgrounds-style covered grandstand. There are no concrete walls in the corners and guardrails line the outside of the straightaways. The scales and a few push trucks are in infield, but the pits are behind the backstretch.