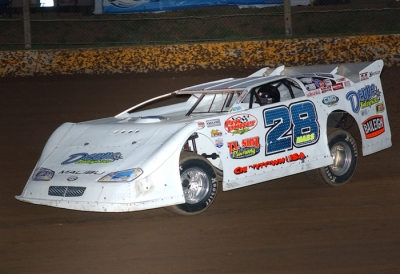 NEW RICHMOND, Wis. (June 19) — They say history repeats itself and Jimmy Mars of Menomonie, Wis. backed that up Friday night as, for the second straight year, he survived the 50-lap battle and captured the World Dirt Racing League’s first leg of The Masters at Cedar Lake Speedway. | Slideshow

“I got lucky and got a good number,” Mars said of the pill-draw format. “That started the night off right.”

The evening program was halted for 45 minutes by a light passing shower. On an already heavy track surface, the added moisture made for a rough night for some drivers. Others, like Mars, were able to battle back against the conditions.

“That track was pretty wild,” Mars said while picking up his $5,000 payday in victory lane. “I made sure I had plenty of tearoffs just in case I fell back.”

Mars led all 50 laps en route to the win and was virtually uncontested with the exception of two late-race restarts. Cautions with eight and three laps to go gave the second-running Justin Fegers an opportunity to stick a nose underneath Mars, but he couldn’t complete the pass off the corners.

After jumping out to the early race lead, Mars set a torrid pace at the front of the field. Already slicing through lapped traffic on lap nine, Mars opened up a full straightaway lead over the nearest competitor before a lap 16 caution erased his advantage.

“I went up on the top when I could,” Mars said. “My car worked good up there.”

A rash of midrace yellows kept the 17-time WDRL winner from getting too big of a lead. Behind him, an ongoing race for second saw a turntable of wheelmen holding down the bridesmaid honors. Early on, Zach Johnson of Kensington, Minn. held the spot before being overtaken on lap 17 by Tiffin, Iowa’s Denny Eckrich. Eckrich eventually lost the spot to both Jason Utter and Fegers before unexpectedly falling pitside during a lap-24 caution. At the end of the race, Fegers had to fight off Adam Hensel to keep the second position.

When all was said and done, Mars had claimed his second WDRL victory in as many nights, and had done so on one of the tracks he calls home. “I have to thank all of my fans that are here. It means a lot,” he said.

Notes: Mars drives an M-B Customs Chassis with a Pro Power engine and sponsorship from Deppe Enterprises, T.L. Sinz Plumbing, Chevytown USA, and Baileigh Industrial. ... Mars has 17 career WDRL victories, tied for third all time with Darren Miller of Chadwick, Ill. ... Only 14 of the original 24 starters were running at the end of the race. ... Eight cautions waved, most of which were for flat tires or mechanical problems. ... Notable drivers who failed to make the feature lineup: Jeff Aikey, Jeremy Grady, Andrew McKay, Rob Moss and Jake Redetzke. ... WDRL wraps up a four-race stretch with the second night of The Masters at Cedar Lake on Saturday.