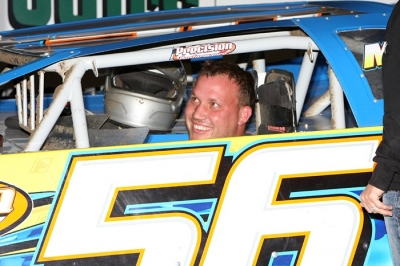 FARLEY, Iowa (June 16) — Eighth-starting Andy Eckrich of Iowa City, Iowa, earned $10,000 for his victory in the unsanctioned Tornado Tuesday special at Farley Speedway. The former track champion, who took the lead from Chad Simpson of Mount Vernon, Iowa, on a lap 20-restart, outran Will Vaught of Crane, Mo., at the half-mile oval for one of the richest victories of his career. | Slideshow

Vaught, who made a lap-17 pit stop, settled for second. Simpson, the polesitter and early leader, rallied after pitting on the 22nd lap to change a flat tire and finished third. Jeff Larson of Freeport, Ill., who started 16th, and unheralded Jake Meier rounded out the top five at the Simmons Promotions track. Brian Birkhofer (lap 15) of Muscatine, Iowa, and Billy Moyer (lap 20) of Batesville, Ark., both fell out while running second.