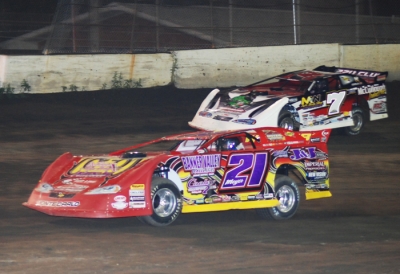 KANKAKEE, Ill. (June 12) — Rolling to his fifth career UMP DIRTcar Summernationals victory at Kankakee County Speedway, polesitter Billy Moyer of Batesville, Ark., crept around the inside groove to outrun a flurry of groove-swapping contenders behind him. Moyer, whose previous series victory at the third-mile oval came in 2002, collected $10,000 for the 40-lap triumph in taking the checkered flag by a full straightaway. | Complete Summernationals coverage

Outside front-row starter Matt Miller of Waterville, Ohio, stayed with Moyer after a lap-10 restart, slipping ahead out of turn four to lead the 15th lap in the outside groove, but the low-running Moyer went right back ahead and wasn't challenged the rest of the way.

"Matt got up there around that outside. ... I thought he was maybe going to get me a little bit, but I just kind of picked it up just a little bit and hit my marks down there," Moyer said. "It's real easy to overdrive that deal when it gets to running around the bottom like that, and we were able to do everything right tonight."

"I took the lead there and I was hoping that bottom would slow down a little bit more, but Billy just doesn't make mistakes down there," Miller said. "I hit about three good laps in a row there. I think I kind of snuck up on him — I don't think he expected it. I think he kind of changed his line and picked up the pace just a little bit more."

The second-row starters ran up front most of the way but fell by the wayside after contact with 10 laps remaining. Two-time and defending Summernationals champion Dennis Erb Jr. of Carpentersville, Ill., was running third when a flat tire on the 31st lap getting together with Scott James of Lawrenceburg, Ind., on the frontstretch as they dueled with Miller, who briefly slowed exiting turn four. Erb's flat tire forced him into the pits for a tire change, and two laps later, James spun exiting turn four to fall from contention.

The race was slowed by four cautions, none for serious incidents. The first start was called back after sixth-row starters Ted Loomis and Steve Sheppard got tangled entering turn one. A lap-10 caution appeared when Randy Korte slowed with a flat tire on the frontstretch infield. Erb's flat and the spin by James brought out the final two yellow flags in the final 10 laps.

The series moves on to Kamp Motor Speedway in Boswell, Ind., on Saturday night for the $10,000-to-win third leg of the 27-race tour. Wes Steidinger of Fairbury, Ill., won last year's event at Kamp.

Fifth-starting Randy Korte used the low groove to work his way to the front in the early laps and wasn't challenged the rest of the way. Polesitter Brian Shirley, who was in danger of missing a transfer spot midway through the race, rebounded to finish second by taking the spot from Wes Steidinger in the final laps with a turn-three pass. The third-starting Wes Steidinger got the third and final transfer spot while Duane Chamberlain overtook Eric Smith on the last lap to finish fourth. The initial start was called back because of a turn-four scramble and a lap-five caution appeared for a turn-three tangle between Dick Potts and Mike Provenzano. Justin Rattliff, who started outside the front row, was running fourth when he slowed to draw a lap-eight caution.

Aaron Ricketts, the track points leader, received the track provisional to start the feature. ... Joe Harlan's night ended in the fourth heat when the yoke broke off his transmission. ... Jeep Van Wormer's car was lightly smoking, but only because it was burning a little oil, his father reported. ... The top three finishers from a rugged B-Main lineup transfer to the main event. ... It's a cool but pleasant evening with a little breeze picking up.

With 22 cars set for one C-Main, UMP officials split the field into two C-Mains with the winner of each transferring to the B-Main. Jason McBride fought off Bret Sievert to win the first C-Main, while Brandon Sheppard won the second C-Main in wild fashion. Derek Chandler led most of the second C-Main, but he jumped the cushion in turn four and got into the wall. Seconds before that, Sheppard and Scott Schmidt got out of shape entering turn three. Schmitt spun while Sheppard righted his car in time to beat Steve Dimmick to the checkered flag.

Outside front-row starter Will Vaught beat polesitter Aaron Ricketts into turn one, then withstood a high-side charge from third-starting Jason Feger for the victory. Feger nearly got alongside of Vaught exiting turn four before the race's midpoint, but he ran out of room when Vaught drifted high toward the flagstand. Feger never got that close again and fought off fourth-starting Shannon Babb for second. Babb got the third transfer spot while Ricketts, the third fast qualifier overall, faded badly to finish sixth.

Polesitter Scott James survived slide-job attack from Terry Casey for a victory in the caution-plagued fourth heat. Casey put an early move on James in turns three and four, but James answered it with a slide job of his own in turns one and two. The fifth-starting Casey got the second transfer spot a car length behind the winner while his fellow third-row starter Rodney Melvin was a close third. Eric Smith was fourth but never in serious contention for a transfer spot. In the first caution among the heat races, outside front-row starter Joe Harlan got the worst of a lap-two scramble in turn two; Harlan's Z car was pushed off the track. Another caution appeared on the restart when Brent Kreke spun after contact with Dick Potts in turn four; Kreke spun again in turn one two laps later and was black-flagged. The last of four cautions appeared on the seventh lap when fourth-starting Brandon Sheppard slid over the turn-two banking.

Billy Moyer blitzed front-row starters Ryan Unzicker and Kevin Weaver at the outset of the 10-lapper and cruised to an easy victory more than a straightaway ahead. Weaver outdueled the polesitting Unzicker for the second spot, nipping him at the line by inches. Unzicker got the third transfer spot with Wes Steidinger just behind in fourth.

Dennis Erb Jr. stalked polesitter Jeep Van Wormer all race long and made a last-lap pass for a victory. Van Wormer, whose No. 55 appeared to have a little smoking wafting off the rear end, settled for second with Ted Loomis in the third and final transfer spot as they broke away from the field. Justin Rattliff was fourth in a race where a way-off-the-pace Alan Gendusa made life difficult for the leaders, who lapped him twice.

Polesitter Matt Miller led all the way for a 10-lap victory while Brian Birkhofer won a position-swapping battle with Steve Sheppard Jr. for second. Sheppard got the third and final transfer spot, holding off a late challenge from seventh-starting Brian Shirley, who dove under Sheppard in turn three on the eighth lap. Donny Walden was far behind in fifth in the caution-free race.

Off to a hot start on the UMP DIRTcar Summernationals, first-night winner Jeep Van Wormer of Pinconning, Mich., was fastest among 52 qualifiers on the second leg of the 27-race tour at Kankakee County Speedway. Van Wormer turned a lap of 13.948 seconds on the third-mile oval to earn a pole starting spot in his heat race.

The 52-car field is the biggest on the series in two years. Last year's largest car count was 51 on July 4 at Tri-City Speedway in Granite City, Ill. ... The 21-car feature lineup will be set by three cars apiece transferring from the five heat races, three cars transferring from the B-Main and three provisionals. ... Jeep Van Wormer, winner of Thursday's series opener at Brownstown (Ind.) Speedway, enters with the series points lead with 85 points over Dennis Erb Jr. (80) and Darrell Lanigan (75), who isn't in attendance at Kankakee. ... Besides Late Models, modifieds and street stocks are in action at Kankakee for a three-division program. ... Jay Morris hit the turn-four wall in time trials and broke; Mike Mataragas also got into the turn-four wall. ... Kankakee has hosted three Late Model features in 2009 with Kevin Weaver of Gibson City, Ill., winning two and Aaron Ricketts of Fairbury, Ill., winning one, his first-ever Late Model feature victory. RIcketts was the third fastest qualifier overall for the Summernationals event. ... Three drivers lost their qualifying times for failing to report to the scales.