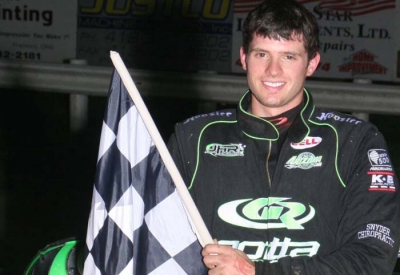 Jon Henry led all the way at Fremont. (Action Photos)

Henry started on the pole and led every lap in his green No. 1, outrunning fellow front-row starter Shawn Negangard of Osgood, Ind.

"I've heard and read a lot about this place and the great racing that happens here. Now I can say I'm part of that excitement," Henry said in victory lane. "The racetrack was interesting ... it was one of those races tonight where you had to hug the bottom to find that moisture coming off the corner. ... I kept making an error and then get back to the bottom and be able to stick it. I said 'I'll just drive it straight.' "

In the 30-lap feature, Henry pulled away to a big lead after a first-lap caution that involved four cars. Behind Henry, a battle among Negangard, Brian Ruhlman of Clarklake, Mich., Ky Harper of Holland, Ohio, and Larry Kingseed of Castalia, Ohio, raged, but three cautions between laps seven and 10 slowed the action.

After the spate of yellows, Henry edged away again with Negangard and Kingseed battling for second, with Harper and 11th-starting Mike Bores of Bellevue, Ohio, also dueling for top-five spots. Henry stayed in control despite a pair of cautions on laps 22 and 23, while Negangard got the second spot. Harper ended up third followed by Bores and Kingseed.

Notes: Henry's Shane Halcomb-owned Rocket Chassis is sponsored by Jeg's and Professional Drywall. ... Henry broke a driveshaft in hot laps but made repairs in time for his heat race. ... The night's racing was sponsored by Underground Utilities Inc. ... On Fan Appreciation Night, area school children were admitted free. ... ALMS competitors take a break before a June 19-20 weekend at Moler Raceway Park in Williamsburg, Ohio, and Oakshade Raceway in Wauseon, Ohio.