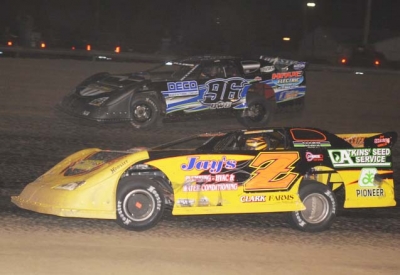 FARMER CITY, Ill. (May 29) — Surviving a late-race scare, Joe Harlan of El Paso, Ill., held on at Farmer City Raceway for a $2,000 victory on the Monster Midwest Tour. Harlan's victory went down as a flag-to-flag 40-lapper in the scoring sheets, but it wasn't that easy.

Harlan started outside the front row and got the jump on polesitter Michael Kloos of Trenton, Ill., at the outset, staying in control on the smooth track surface throughout the race. Harlan withstood challenges on two restarts and took the white flag while still in command.

But on the final lap, fellow El Paso driver Ryan Unzicker slowed on the backstretch and Charley Hess of Peoria, Ill., spun in front of the leader, taking Harlan around with him. Officials restored Harlan to the lead for a one-lap dash to the checkered flag, and completed his victory, beating fourth-starting Steve Sheppard Jr. of New Berlin, Ill., to the finish line. Richie Hedrick of Urbana., Ill., advanced five positions to finish third while Derek Chandler of Pontiac, Ill., and series points leader Eric Smith of Bloomington, Ill., who started 10th, rounded out the top five. Kloos ended up 15th.

Notes: The 36-year-old Harlan's Rocket Chassis is sponsored by Rabe's Professional Carpet Cleaning, Jay's Plumbing, Cook's Auto Body and Dairy Queen of Pontiac. ... Harlan's only previous feature victory in 2009 came in a regular-season event at Fairbury (Ill.) American Legion Speedway on May 9. ... The Monster Midwest Tour originally had a four-race stretch scheduled for May 27-30, but it was shortened to two events. The May 27 event at Shepp's Speedway in Alexander, Ill., was rained out, and the May 30 event at Lincoln (Ill.) Speedway was cancelled because of confusion over whether it would be a UMP DIRTcar points event (UMP told series officials it wasn't). ... Ryan Unzicker won the May 28 event at La Salle (Ill.) Speedway. ... Bobby Pierce, son of Hall of Fame driver Bob Pierce, won the UMP Crate Late Model feature at Farmer City. ... The Illinois-based series takes a lengthy break before returning to action July 23-26 at Charleston Speedway, Farmer City Raceway, Kamp Motor Speedway in Boswell, Ind., and Vermilion County Speedway in Danville, Ill.