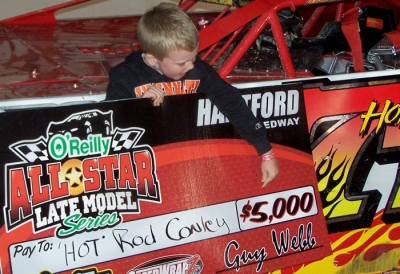 “I knew my car was good on the bottom,” Conley said after winning the 40-lapper at the half-mile oval. “But I also knew Matt (Miller) was back there and running strong too. I felt like if I held my line, I would be OK.”

Jared Hawkins of Fairmont, W.Va. and Conley led the field to the green with Conley getting the early advantage. As Conley sped away from the competition, a multicar accident on lap three involving Hawkins and Clarklake, Mich., veteran Brian Ruhlman kept Conley within striking distance. Jeep Van Wormer of Pinconning, Mich. was also involved; he and Hawkins both retired.

After a lap-four caution, Blair grabbed the runner-up spot from Miller and set his sights on Conley. Blair wasted little time tracking down the race leader as he pulled alongside on the sixth lap and made the move a lap later, using the lapped car of Ruhlman as a pick.

Conley stayed within two lengths of Blair as the frontrunners began slicing their way through lapped traffic. Miller then joined the lead duo to make it a three-dog fight for the top spot just before a lap-17 caution for Boom Briggs slowed the pace. Under the yellow, Blair was forced pitside for the tire change, returning the lead to Conley.

On the restart, Conley led Miller and Miley back to the green as Blair re-entered the speedway with new rubber. A rash of cautions kept Conley from pulling away and aided Blair’s run back to the front.

Conley kept Miller at bay on the frequently restarts while Blair worked his way back into the top five. At the checkered flag, Conley was 10 lengths ahead of Miller.