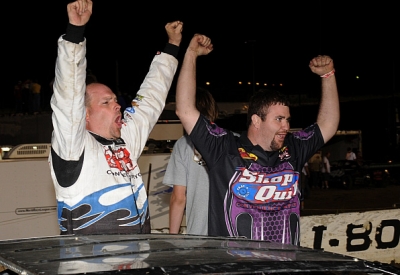 Anderson, the reigning MLRA champion who notched his first victory of 2009, took the checkered flag in the 50-lapper ahead of Kyle Berck of Marquette, Neb., and Al Purkey of Coffeyville, Kan. Alan Vaughn of Belton, Mo., was fourth and provisional starter Denny Eckrich of Oxford, Iowa, rallied from the rear of the 30-car field for a top-five finish in a race slowed by four cautions.

Tough-luck frontrunner Chad Simpson of Mount Vernon, Iowa, the reigning WDRL champion, led most of the race but jumped the cushion between turns three and four on the 44th lap to lose his car's right rear tire. After replacing the rubber, Simpson got tangled up in a frontstretch accident two laps later, ending up 18th.

Polesitter Mike Collins of Council Bluffs took command at the outset of the feature, but Simpson tracked him down amid lapped traffic to take over the point on lap 17. Simpson led through the race's middle stages at the 4/10-mile oval with Anderson, Berck and Collins frequently trading positions behind him. Soon enough, Berck and Anderson moved up to swap the lead with Simpson, who was doing his best to hang on and officially led 31 laps.

Simpson was facing pressure with six laps remaining when he got over the cushion and came to a stop in turn four with a flat right rear tire. He darted to the infield to replace the tire, handing the lead to Anderson with Berck, Purkey, Vaughn and Eckrich holding top-five spots.

Two laps after the restart, Simpson and Eckrich got together exiting turn four, sending Simpson's No. 25 spinning down the frontstretch. With nowhere to go, John Kaanta's No. 85 slammed head-on into Simpson's car, knocking him out of the race for good.

Berck summoned a last-lap charge, but Anderson held on for the victory.