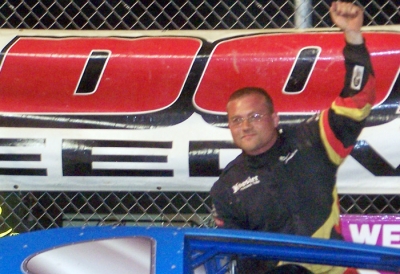 ROSSBURG, Ohio (May 24) — Long-time Eldora Speedway racer Duane Chamberlain can finally etch his name into the record books at the historic half-mile track. The Richmond, Ind., driver took the lead from Greg Johnson of Mitchell, Ind., on the third lap and never looked back en route to a $2,000 victory in Sunday’s Johnny Appleseed Classic on the Sunoco American Late Model Series. | ALMS notebook

“This is great!” an excited Chamberlain said in victory lane. “This new Rocket Chassis was just awesome. I have to thank my crew for sticking with me and for everything they do.”

Johnson and Scott led the field to the green with Johnson grabbing the early lead. The initial start would be nixed, however, after a multicar accident in turns three and four halted the action, eliminating Rich Neiser, Scott Orr and Shawn Toczek.

When racing resumed, Johnson once again outpowered Scott into turns one and two as Chamberlain made a bold move from his fifth starting spot to take third. Chamberlain showed his strength early as he roared past Scott one lap later to take second and set his sights on Johnson.

Wasting no time, Chamberlain used a slide job on Johnson in turns one and two to take command on the third lap. Behind the leader, Moran slipped past Scott to grab third and engage Johnson in a battle for second. As those two drivers wrestled for the runner-up spot, Chamberlain ran off and hid from the field.

The race leader set a blistering pace as he entered lapped traffic after 11 laps. Chamberlain immediately disposed of four backmarkers and put an entire straightaway between himself and Johnson, who had his hands full with Moran. Chinn, who started eighth, was quietly working his way forward, moving into the top five on lap 16.

Moran finally took second from Johnson with six laps remaining, but he didn't have time to erase Chamberlain’s huge lead. Chamberlain notched his first Eldora victory just two weeks prior to the $100,000-to-win Dream, a race he's started once with a 17th-place finish in 2001.

“I’d love to be right back here in a few weeks!” Chamberlain said in winner’s circle.

Notes: Chamberlain drives an SMS-powered Rocket Chassis with sponsorship from GMG Miracle Racing and C.W. Watson Excavating. ... Chamberlain’s last Sunoco ALMS win came on June 22, 2007 at Attica (Ohio) Raceway Park. ... Notable drivers failing to make the main event included Tommy Kerr, Kerry Mathew, Jason Keltner, Dusty Moore, Ryan Vanderveen, Rick Delong (the 2001 Johnny Appleseed winner) and NHRA star Cruz Pedregon, tuning up for the Prelude to the Dream. ... Jon Henry of Adam, Ohio, who headed to Eldora with the series points lead, hit the turn-two wall in his heat race, resulting in a broken lower control arm and forcing him to use a provisional to make the feature. ... Ky Harper, who came to Eldora second in ALMS points, also used a provisional after a collision and brush with the wall in his heat race forced him out. ... Four previous Johnny Appleseed Classic winners were in attendance: Brian Ruhlman (2002, '05), Jerry Bowersock ('03), Rick Delong ('01), and John Mason ('97). ... The next ALMS events are May 29 at Hartford (Mich.) Motor Speedway and May 30 at Fremont (Ohio) Raceway. The $5,000-to-win Hartford event is co-sanctioned by the first-year O'Reilly All Star Series.