Made in the shade: Noonan grabs ALMS win 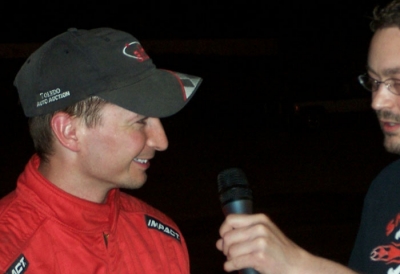 Noonan talks about his victory at Oakshade. (Dustin Jarrett)

“My car worked really well out there,” said the slender Noonan, who notched his third career series victory. “I felt like I was better on the bottom, but I could run anywhere I needed to get around the traffic.”

For the second straight night of ALMS action, Harper started on the pole and, after two aborted starts, jumped out to the early advantage. Noonan tucked into second with Henry third, Kevin Reeve fourth, and Ruhlman fifth. The top three inched away from the field and Ruhlman slipped by Reeve to take over fourth.

As the lead trio began working through backmarkers, Noonan pulled alongside Harper on lap seven. Using a lapped car as a pick, Noonan rolled by Harper for the lead in turns one and two while Henry’s attempt to follow suit was denied.

Noonan wasted little time opening up a six-length lead on Harper, Henry and Ruhlman. As the leader weaved through the back of the field, Harper and Henry waged a fierce battle for second that saw the two young guns run side-by-side nearly seven full laps before Henry edged ahead with 10 laps remaining.

Henry used multiple lines to try to track down Noonan. Although he was able to cut into the sizable lead Noonan had built, Henry ran out of laps and, when the checkered flag waved, Noonan was first across the stripe. “Hopefully this is the first of many this year,” Noonan said.