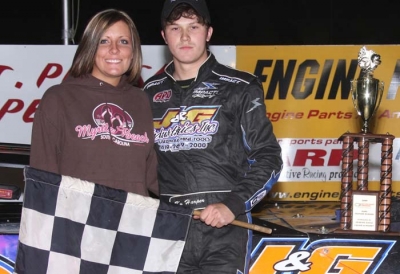 “Man, I don’t even know what to say,” Harper said after the win. “This was a long time coming. This win here is for (my crew), and it’s also for my grandpa, who recently passed away.”

In front of a near capacity crowd, Harper started on the pole with Henry on the outside. In a drag race to the bottom of turns one and two, Harper and Henry made slight contact with Harper assuming command of the field followed closely by Henry, Zack Olger, Marcoullier and Brian Ruhlman.

By lap five, Ruhlman disposed of a fading Olger and moved into fourth. Meanwhile, Henry’s left front tire was quickly losing air from the first-lap contact with Harper. Even so, Henry continued to look under Harper in a bid for the lead while turning away the challenges of Marcoullier and eventually Ruhlman. McNeil would soon crack the top five to battle for second as well.

A pair of lap-10 cautions kept the field tight as Henry used the Delaware double-file restart to slip a nose under Harper going into turns one and two. Harper fended off Henry’s advances as McNeil worked on Ruhlman in an entertaining duel for fourth.

Harper’s middle groove proved to be a key factor in his victory. Throughout the second half of the event, he was challenged high by Marcoullier and low by Henry, forging ahead despite his flat left front tire. On a lap-16 restart, Marcoullier raced door-to-door with Henry for the bridesmaid honors, finally completing the pass a lap later. Shortly thereafter, McNeill took fifth from Ruhlman with Noonan following suit a few circuits later.

Marcoullier tried several high-side heroics against Harper while Henry pulled even with Marcoullier in the corners. McNeil’s presence made it a four-way battle for the lead over the final five laps. Although he never stretched his margin more than a few lengths, Harper held on for the victory.

“This is great,” Harper exclaimed. “The car was good and would go anywhere I wanted it to.”

Notes: Harper drives a Rocket Chassis with a Custom Racing Engine and carries sponsorship from J&G Toledo Properties and Wolverine Restoration. ... Only three cautions waved during the event. Two fell on lap 10 for separate accidents, and the final waved on lap 16. ... Zack Olger lowered his own track record in qualifying with a lap of 14.063 seconds, earning a $250 bonus for his accomplishment. ... Rick Stout was on hand piloting a former Wayne Chinn car with a crate engine under the hood. ... ALMS competitors complete the Memorial Day weekend with a Saturday event at Oakshade Raceway in Wauseon, Ohio, and a Sunday event at Eldora Speedway in Rossburg, Ohio.