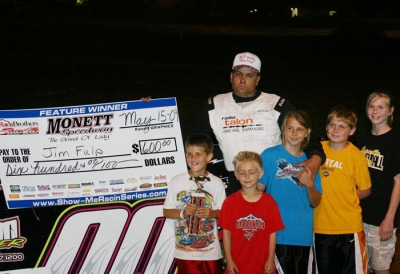 Jim Fulps has some visitors in victory lane. (Ron Mitchell)

Justin Wells of Aurora, who started 10th, took the second spot from Leslie Essary of Crane, Mo., on the 20th lap, but he settled for second behind Fulp. Essary was third followed by Shane Essary of Aurora and front-row starter Jarrod Hilton of Crane. Holloway pitted during a lap-17 caution and came back to finish 10th.

Notes: Fulp's GRT Race Car is sponsored by Ken's Collision and Dirty Bob's. ... Rain threatened the night's action, but the track was able to complete the race before weather reached the southwestern Missouri track. ... Bill McMurtrie drew the first caution when he went over the banking on the 17th lap. ... On the restart, a turn-three pileup included Roger Wilson, Adam Brown, Larry Campbell and Chris Morelock. ... Ken Essary pitted during the caution to change a flat tire. ... The May 16 Show-Me Racin' Series event at Nevada (Mo.) Speedway rained out. ... Next up for the series is a June 6 event at Tri-State Speedway in Pocola, Okla.