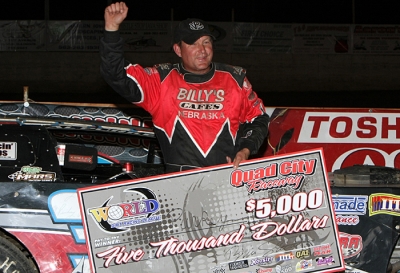 EAST MOLINE, Ill. (May 10) — Polesitter Al Purkey of Coffeyville, Kan., fought off challenges from Jason Feger of Bloomington, Ill., to capture a World Dirt Racing League victory at Quad City Raceway. Purkey, who led all but two laps en route to the $5,000 payday, notched his second career WDRL victory and first since 2004. | Slideshow

Feger, who nosed ahead of Purkey to lead laps 21 and 33, settled for second followed by reigning series champion Chad Simpson of Mount Vernon, Iowa. Dennis Erb Jr. of Carpentersville, Ill., was fourth and series rookie Chad Mahder of Eau Claire, Wis., rounded out the top five in the caution-free 40-lapper.

Purkey darted into the early lead with Mahder in tow. Simpson dropped Mahder to third, but Feger soon used the high groove to sweep past both of them to grab the second spot.

Feger set his sites on Purkey and battled the leader through traffic, sometimes edging ahead before Purkey would regain the point.

Just before the halfway point, Feger showed his nose to Purkey down the back straightaway with Simpson running a strong third at the time. All three drivers were on the same straightaway for almost the entire second half of the race. But each time Feger would complete a pass, Purkey was right there to take it back.ï¿½ï¿½

Feger took one last look to the inside of Purkey on the last lap, made a move to the bottom that did not work and had to settle for second place as Purkey took the checkered flag.

"I knew he was there and we got together there on the frontstretch, but that's quarter-mile racing," Purkey said. "I think he would have done the same thing. It's just good hard racing. I'm sure there's no hard feelings."

Notes: Purkey's Rocket Chassis is sponsored by Billy's Cafes and TaylorMade Proformance. ... His only other WDRL victory came July 17, 2004, at Mid-Nebraska Speedway in Doniphan in a race co-sanctioned by the O'Reilly National Championship Racing Association and O'Reilly Midwest LateModel Racing Association. Purkey is a five-time MLRA champ and two-time NCRA champ. ... Among drivers failing to make the feature: Richie Hedrick, Mike Cothron, Steve Lance Jr. and Purkey's car owner, Bill Koons. ... The race was a makeup of an April 19 rainout. ... Next up for WDRL competitors is the $5,000-to-win Alphabet Soup Classic on May 24 at I-80 Speedway in Greenwood, Neb., a race co-sanctioned by MLRA and NCRA.