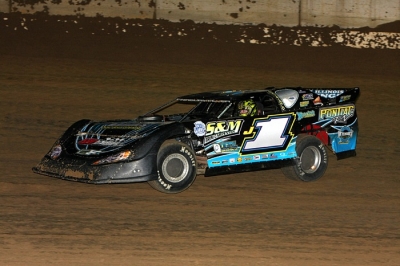 PEORIA, Ill. (May 8) — Wes Steidinger of Fairbury, Ill., won a classic battle of a rallying Dennis Erb Jr. of Carpentersville, Ill., for a $4,000 victory in the Don Bohlander 65 at Peoria Speedway. | Slideshow

Steidinger blasted into the lead from his front-row position and held on to fight off Erb, who twice had to rally from the rear, once for a lap-seven flat tire and another time for a tangle with Brian Harris of Davenport, Iowa.

Steve Lance Jr. of Cuba, Ill., was third followed by Donny Walden of Towanda, Ill., and Harris on a moon-lit night in central Illinois. The event honors the legendary Bohlander, a 10-time track champion and seven-time Illinois State Champion. Hometown driver Charley Hess battled early among the leaders but lost a left-rear wheel to end his charge.

The event was a makeup from an April 25 rainout at the quarter-mile oval.

Notes: Steidinger's Rayburn Race Car has a Mullvain powerplant with sponsorship from Executive Homes and Pontiac RV. ... Steidinger shut down his family-backed team during the off-season but is running in 2009 in his car which is now owned by driver Russ Adams of Princeville, Ill. ... Steidinger plans a part-time schedule before running the complete UMP DIRTcar Summernationals slate. ... The Don Bohlander 65 is a benefit for Parkinson's Research, the disease the struck Bohlander. ... Peoria's next Super Late Model special is a May 27 Monster Midwest Tour event...ï¿½ The June 30 Summernationals event at Peoria pays $6,000 to the winner.