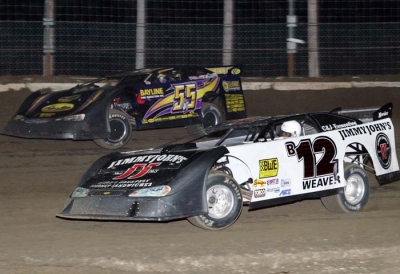 Front-row starters Jeep Van Wormer of Pinconning, Mich., and Steve Sheppard Jr., of New Berlin, Ill., one of the track's owners, battled back and forth through the first half of the race while the fifth-starting Weaver worked his way into contention. Weaver took over and led through the race's late stages to take the checkered flag at the quarter-mile oval.

Notes: Weaver's Bill West Enterprises car is sponsored by Jimmy John's Gourmet Sandwiches and C&J Excavating. ... Weaver's previous Northern Allstars victory came last year at Macon (Ill.) Speedway on Aug. 26. ... He's tied for ninth in all-time Northern Allstars victories. ... Shepp's Speedway hosted its first Super Late Model event and second event overall; Tait Davenport of Paducah, Ky., won the April 26 UMP-sanctioned Crate Late Model feature. ... The event drew 23 cars, but Wes Steidinger and Russ Adams weren't able to start the feature event. ... Next up for the Northern Allstars is a $2,000-to-win event on May 25 at Macon. ... The month of May wraps up with a $2,000-to-win event at La Salle (Ill.) Speedway on May 28, then a pair of $5,000-to-win events on May 29-30 at Paducah (Ky.) International Raceway and I-55 Raceway in Pevely, Mo.