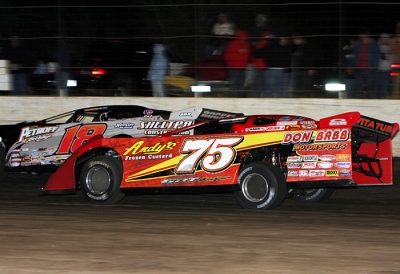 FARLEY, Iowa (May 1) — One of Missouri's best drivers made a rare trip to the upper Midwest worth the long, 10-hour haul on Friday night. Outside front-row starter Terry Phillips of Springfield, Mo., dominated Farley Speedway's half of the May Day Two-Track Classic with a 50-lap victory worth $10,000. | Slideshow

The unsanctioned victory on a night when more than 50 top Dirt Late Model teams raced at Farley came in the first-ever trip to the half-mile oval for Phillips, a four-time champion on the Missouri-based O'Reilly MARS DIRTcar Series.

"I like it. It is a very unique place and it has some drivability," Phillips said after dominating the race. "There are a lot of things different about it, like turns three and four, I don’t think I ever did figure those out."

Whether he ever figured out the whole track or not, Phillips knew enough to race to what was apparently his first Hawkeye State victory in 13 years.

Polesitter Matt Miller of Waterville, Ohio, settled for second with 11th-starting Dennis Erb Jr. of Carpentersville, Ill., rallying to finish third ahead of 20th-starting Jimmy Mars of Menomonie, Wis. Tommy Elston of Keokuk was the top home-state finisher in fifth.

Farley regular Jeremiah Hurst of nearby Dubuque crossed the finish line second behind Phillips, but he was disqualified after weighing in light at the scales following the race.

At the drop of the green, Phillips grabbed the lead with Miller in tow. In the early stages, Phillips and Miller pulled away from the field, enjoying breathing room through the early laps. Cautions on laps 6 and 7 bunched the field, but the duo pulled away again on restarts.

Phillips and Miller held the top two spots for the next yellow on lap 26 when debris the shredded roof of Crane, Mo.'s Will Vaught drew a caution. Hurst was knocking on the door in third for the restart followed by Elston and third-starting Chad Mahder of Eau Claire, Wis.

Phillips withstood four more restarts the rest of the way and finished off his lucrative victory.

Notes: Phillips drives a GRT Race Car powered by a Hatfield Racing Engine with sponsorship from Andy's Frozen Custard and Don Babb Motorsports. ... According to the best records immediately available, Phillips hadn't won in Iowa since 1996, when he swept an O'Reilly Midwest LateModel Racing Association doubleheader on Aug. 9-10 at Shelby County Speedway in Harlan and Crawford County Speedway in Denison. Those two victories came amid a five-race win streak during his championship MLRA season, when he won a series-best 16 events. ... The night's racing was sponsored by Banner Valley Hauling. ... Night two of the May Day Two-Track Classic moves to the West Liberty (Iowa) Raceway, another Simmons Promotions track, for another $10,000-to-win main event for open-competition Super Late Models. ... Sometimes, someone’s loss is somebody else’s gain, and that was certainly the case for Farley on Friday. Several tracks across the Midwest fell victim to the weather, but the sun was shining on Farley, bringing 52 late models through the pit gate as drivers searched for a place to race. ... It was a late night, however, as a power outage lasting 1 hour and 45 minutes stretched the program. A power line 2 miles south of Farley burned out before time trials were halfway through, plunging the track into darkness. Phillips, the 18th qualifier, got his first lap timed before the outage, then took his second lap nearly two hours later. “I was faster after the delay,” Phillips said. “We were (19.8 seconds) before the lights went out, and we were five-five after they came back on and that put me sixth.” ... Jason Feger of Bloomington, Ill., grabbed quick-time for the evening with a time of 18.888 seconds. ... A six-car dash determined the first three rows for the main event with Matt Miller winning over Phillips, Chad Mahder, Tommy Weder Jr. and Tim Isenberg. Shannon Babb of Moweaqua, Ill., skipped the dash and started sixth.