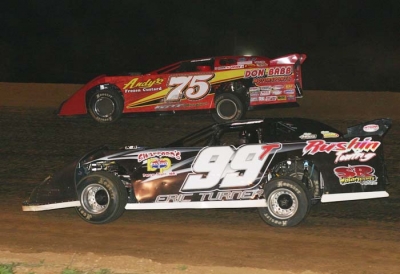 The fourth-starting Phillips fought off late challenges from five-time series champ Bill Frye of Greenbrier, Ark., on Sunday for his first MARS victory of the season. Phillips, who earned $2,500, owns a series-leading 67 career victories, including eight at Monett.

The winner's teammate Jeremy Payne of Springfield finished third in the 35-lapper with front-row starter Brad Looney of Republic, Mo., and Al Purkey of Coffeyville, Kan., rounding out the top five. The polesitting Turner's race ended on lap 25 when a dead battery knocked him out of the race.

Notes: Phillips drives a GRT Race Car with a Hatfield Racing Engine and sponsorship from Andy's Frozen Custard. ... Phillips had a two-victory weekend as he also picked up an O'Reilly MLRA victory on Saturday at Adrian (Mo.) Speedway. ... Will Vaught of Crane, Mo., had a flat tire to bring out a lap-six caution; Vaught finished 19th. ... Hall of Famer Ken Essary of Cape Fair, Mo., earned hard charger honors with his 16th-to-eighth run. ... The series takes a month-long break before Monett hosts the series again on May 24.

Correction: Fixes number of MARS victories for Phillips at Monett.