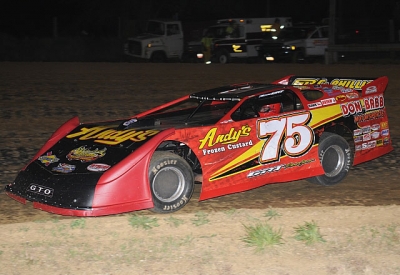 ADRIAN, Mo. (April 25) — Terry Phillips of Springfield, Mo., led all the way at Adrian Speedway to capture his series-leading 94th victory on the O'Reilly Midwest LateModel Racing Association. Maintaining his dominance at Adrian over the past four seasons, Phillips turned back a late charge from a high-running Al Purkey of Coffeyville, Kan., for the $3,000 victory in the Jack Vaughn Memorial. | Slideshow

"The car was real good," said Phillips, whose last series victory came in September at Lakeside Speedway in Kansas City, Kan. "Actually we've been struggling with this car, and we got it going a lot better tonight, so we're real happy about that."

Lapped traffic kept Phillips from pulling away too far from second-running Eric Turner of Hermitage, Mo., and later Purkey, who rallied from the 10th starting spot. Purkey got within striking distance of Phillips on the final lap but didn't have enough to overtake the leader.

"I drove right up to Terry, but getting up to him and passing him is another thing," said the five-time MLRA champion. "I'd sure like to have had another couple of laps, though."

Notes: Phillips drives a GRT Race Car with a Hatfield Racing Engine and sponsorship from Andy's Frozen Custard,Don Babb Motorsports and JFR Graphics. ... Phillips has won five of the last six MLRA events at Adrian going back to September 2006. ... Eric Turner and Al Purkey are tied atop the MLRA standings after two events. ... Next up for MLRA competitors is the SuperClean Diamond Nationals at Lucas Oil Speedway in Wheatland, Mo., a $30,000-to-win event co-sanctioned by the Lucas Oil Late Model Dirt Series.