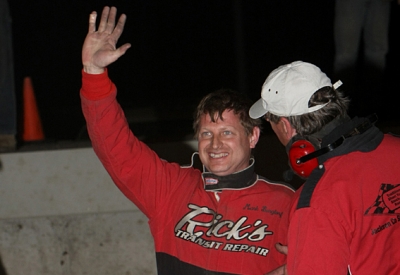 Sixty-one Late Models were in the pits for the second date on the 2009 schedule. That’s the most for any of the 15 series events held at Davenport since 1987 and follows on the heels of the 66 cars on hand for the April 11 opener at 34 Raceway in West Burlington.

Neal drew the pole start and remained in control following back to back cautions on laps four and five. The contest stayed green from that point, as Neal began catching up with backrunners by the 13th circuit and was into heavy lapped traffic by midway.

That congestion gave the eighth starting Burgtorf the opportunity to make up ground and he pulled even with Neal before the frontrunners split a lapped car on lap 24. Burgtorf emerged from that maneuver with the lead, which he never relinquished. Four lapped cars separated Burgtorf and Neal at the checkers.

The previous top car count for a Deery event at Davenport was 56, set on May 18 of 1999. Night two of a weekend tripleheader takes the series to Jackson County Speedway in Maquoketa on Saturday. The tour travels to Quincy, Ill., on Sunday.