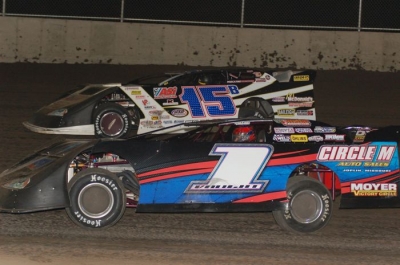 GRANITE CITY, Ill. (April 17) — Outside front-row starter Brian Birkhofer of Muscatine, Iowa, led the final 43 laps of the Frostbuster 50 at Tri-City Speedway for a $10,000 victory in the non-touring UMP DIRTcar-sanctioned event.

Birkhofer overtook early leader and third-starting Will Vaught of Crane, Mo., with a high-side move in turns one and two on the eighth lap and controlled the rest of the race at the 3/8-mile oval across the river from St. Louis, Mo. Scott James of Lawrenceburg, Ind., advanced to finish second with Vaught settling for third. Fast qualifier and polesitter Don O'Neal of Martinsville, Ind., was fourth and Chris Simpson of Mount Vernon, Iowa, rounded out the top five. | Slideshow

The race had a 35-minute break for a lap-16 red flag when Jason Feger of Bloomington, Ill., got into the catchfence exiting turn four. The race resumed after repairs were made. The event's only other caution was for Rickey Frankel on the third lap. The race was held a week later than originally scheduled after an April 10 rainout.