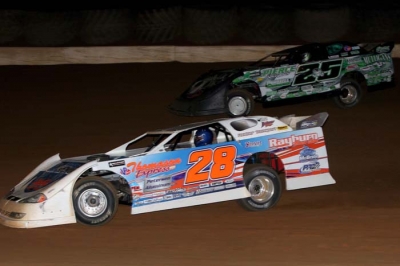 Feger pressured Erb but fell out in the second half of the race with battery problems. Loomis tried to pry the lead from Erb, but crossed the line second. He lost that position when his No. 23 was about 20 pounds light of the 2,300-pound requirement at the scales.

The disqualification moved Daren Friedman of Forrest, Ill., up to second with Guy Volk of Portage, Ind., finishing third. Frank Heckenast Jr. of Orland Park, Ill., and Tyler Boggs of Warsaw, Ind., rounded out the top five in the co-sanctioned event. Rusty Seaver of Stanton, Mich., was sixth as the top finishing ALMS regular.