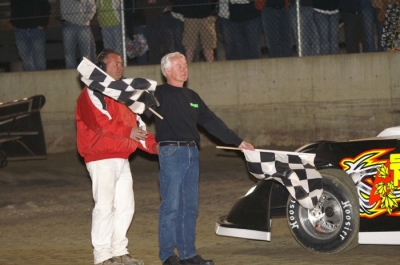 WEST BURLINGTON, Iowa (April 11) — On a night when fans and fellow competitors remembered a favorite driver, Jason Frankel raced to a victory that will be remembered as a highlight of his IMCA Late Model career. The Quincy, Ill., driver was dominant in winning Saturday’s opening-night event in the Deery Brothers Summer Series, topping the Slocum 50 Memorial at 34 Raceway.

The win paid $2,500. That’s almost as much as the amount generated by a portion of the grandstand ticket sales and the evening’s 50-50 raffle that went to the Slocum 50 Scholarship Fund benefitting area high school students.

The fund was established in memory of Brent Slocum, the popular IMCA Late Model driver who died as a result of an accident in the pits at West Burlington in 2005.

“Brent’s family, his crew, everybody was just overwhelmed by the car count and the number of people in the stands,” promoter Amy Laue said. “We were all just thrilled to be able to do something like this in his memory and it was a great night of racing.”

Frankel, IMCA's 2009 weekly racing champion, started outside row one, got the jump on the rest of the 24-car field at the drop of the green and led all 50 circuits. Ray Guss Jr. of Milan, Ill., closed the gap when Frankel began encountering backrunners on lap 10, but he couldn't mount a serious challenge for the front spot. The only caution of the contest came on lap 33 and Frankel was quick to pull away on the restart. Mark Burgtorf of Quincy caught caught Guss for second with seven laps to go and chased Frankel to the checkers. Guss was third followed by Jeff Aikey of Waterloo, Iowa, and Warner, who gave Quincy three of the top five finishers. Reigning series champion Boone McLaughlin was sixth.

Notes: The victory was Frankel's second on the tour. His first came last Aug. 31 at his hometown Quincy Raceway. ... Sixty-six Late Models were entered in the lidlifter, matching the second highest car count number in the 333-race series history. The tour single event car count record of 71 was established at 34’s Pepsi USA Nationals in 2006. Pepsi races in 1999 and 2002 also boasted 66 entries each. ... Opening night for the 2009 series was held 22 years to the day the first-ever series event was held, also at West Burlington. Jay Johnson, the winner of that race, was 13th on Saturday. ... Three series races are scheduled for April 17-19 at Davenport (Iowa) Speedway, Jackson County Speedway in Maquoketa, Iowa, and Quincy.