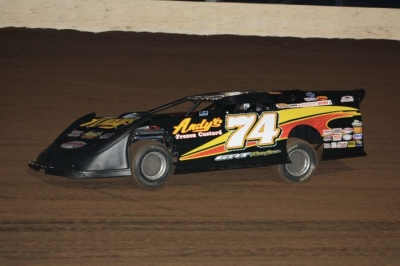 WHEATLAND, Mo. (April 11) — Arizona transplant Jeremy Payne of Springfield, Mo., overtook Will Vaught of Crane, Mo., on the 10th lap at Lucas Oil Speedway and cruised to victory in the season-opening event on the O'Reilly Midwest LateModel Racing Association. The 23-year-old Payne earned $3,000 in the caution-free 30-lapper at the state-of-the-art oval in midwestern Missouri. | Slideshow

Bryant Goldsmith of Corning, Iowa, and Vaught started on the front row with Vaught gaining the early edge, pulling away as Payne worked toward the front. But Payne quickly began cutting into Vaught's lead and took command on the 10th lap.

Payne began slicing through lapped traffic on the 13th lap in building his lead while Sullivan moved up to challenge Vaught for second. Sullivan got the runner-up spot but had no hopes of catching the victorious Payne.

Notes: Payne's Hatfield-powered GRT is sponsored by Andy's Frozen Custard. ... A few ruffled feathers marked the night as Jack Sullivan and Will Vaught had a disagreement in victory lane. Also, law enforcement was called after an altercation between Terry Phillips and Duke Whiseant after the main event. ... Whiseant was also part of a contact-filled battle with Tony Jackson Jr. in a heat race. ... Rylan Long of Greenfield, Mo., was 12th as the top finishing MLRA rookie. ... Among drivers failing to make the feature: Gary Stolba, Delbert Smith, Jason Bodenhamer, Chris Smyser, Jeremy Grady, Chris Hawkins and Bryon Allison. ... Next up for MLRA competitors is an April 25 event at Adrian (Mo.) Speedway. (Additional information from correspondent reports)