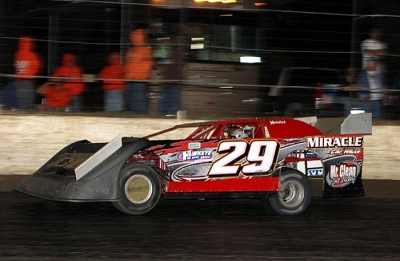 FARLEY, Iowa (Sept. 20) — Starting outside the front row, Jeremiah Hurst of Dubuque, Iowa, held off Curt Martin's charge from the rear at Farley Speedway to capture the 31st annual Yankee Dirt Track Classic at Farley Speedway. Driving a No. 29 car instead of his usual No. 77, Hurst earned a career-high $10,000 in the unsanctioned 100-lap victory at the half-mile oval. | Slideshow

Martin, who started 17th but went to the tail after the first caution when his vision was obscured by a piece of his car, thought he'd taken the lead from Hurst before a lap-96 yellow flag, but officials restored Hurst to the lead and he held on the final laps.

Martin, of Independence, Iowa, settled for second place with Jeff Larson of Freeport, Ill., elevated to third after apparent third-place finish Tommy Elston of Keokuk, Iowa, was disqualified in postrace inspection. Chris Simpson of Mount Vernon, Iowa, was fourth and Jeff Aikey of Cedar Falls, Iowa, rounded out the top five in the event postponed a week by inclement weather.

Notes: There was plenty of drama following the race. Hurst's car, which had a flat left rear tire in victory lane, was weighed twice before checking out OK and officials tore down his spec motor, declaring his victory assured 45 minutes following the race. ... Brian Harris ran among the leaders before pulling in on lap 52 with engine problems, possibly a broken valve spring. ... Electrical problems plagued Andy Eckrich, who dropped out early.