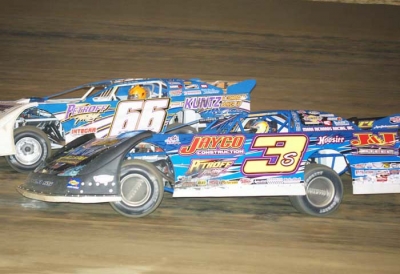 Feger got the jump on the polesitting Korte at the outset with Korte falling to third behind Jeff Walston after an early restart. Feger built a comfortable lead over Korte while Shirley, who started seventh, worked his way into the top five. Korte began tracking down Feger as the race heading for the midpoint, and Korte took command on lap 25 as Feger made contact with the slower car of Kyle Beard.

Feger stayed right in Korte's tire tracks until smoke began appearing behind Korte's car on lap 35. Four laps later, Korte was out of the race and Feger was back in command as Shirley swept into second on the restart. Feger didn't last long up front, though, as a flat tire forced him pitside and handed the lead to Shirley, who went on to capture his fourth career MARS victory.

Notes: Former track champion Terry English of Benton, Ky., started fourth and ran up front early before mechanical problems forced him pitside. ... John Tindal and Lee Thomason tangled to draw an early caution. ... An early flat tire hampered Rodney Melvin, whose brother Bobby made a rare return to the track to finish 11th. ... The Aug. 21 tuneup event, when NASCAR standout Tony Stewart was scheduled to compete, was rained out. ... MARS competitors head to I-55 Raceway in Pevely, Mo., for a $5,000-to-win event on Saturday night, Aug. 23.